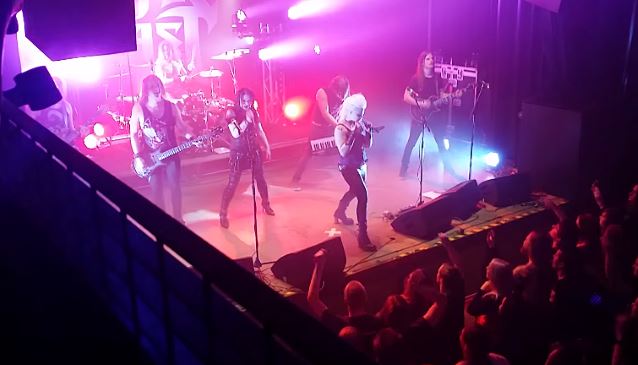 Finnish metallers BATTLE BEAST were rejoined by their original lead singer, Nitte Vänskä, on stage on March 18 at Nosturi in Helsinki, Finland to perform three songs: "Victory", "Show Me How To Die" and "Enter The Metal World". Fan-filmed video footage of her appearance can be seen below.

Vänskä left BATTLE BEAST in August 2012 and was replaced by Noora Louhimo.

Regarding Vänskä's departure from the band, BATTLE BEAST previously said: "Nitte sent the rest of the band an e-mail stating that she was leaving the band, effective immediately. As the reason for her leaving, she cited her will to focus on her family life. As this happened without any prior notice, the rest us were slightly disappointed. But what's done is done."

BATTLE BEAST last month parted ways with lead guitarist and main songwriter Anton Kabanen due to "insurmountable disagreements" with the other members of the band. A substitute guitarist has been enlisted for BATTLE BEAST's current shows, and the remaining members of BATTLE BEAST are already preparing material for their upcoming fourth album.

BATTLE BEAST's third studio album, "Unholy Savior", entered the Finnish chart at position No. 1. The CD was released on January 9 in Europe and January 13 in the U.S. via Nuclear Blast.