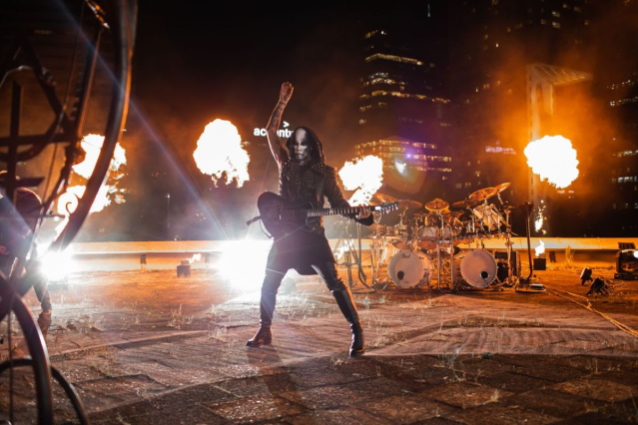 Ever the creative innovators, Poland's extreme metal overlords BEHEMOTH have revealed their latest visual feast, "Opvs Contra Cvltvram", a streaming event shot on the roof of Warsaw's renowned Palace Of Culture And Science and premiering at 18.00 CET on Thursday, September 15 on the band's YouTube channel. This landmark event heralds the arrival this Friday, September 16 of the band's epic 12th studio album, "Opvs Contra Natvram".

"For a long time, BEHEMOTH have been censored and pursued by the Catholic Church at the behest of our fascist government. This performance, with the backdrop of this building, represents a monumentous middle finger to those pigs and another for Joseph Stalin and his Soviet circle jerk. Viva Freedom!"

The band's upcoming 12th studio album is a stark reminder of the rebellion, individuality and unflinching self-expression that BEHEMOTH's phenomenal work imbues, shaped by a literary worldview. It also reflects a musical evolution, as there's little doubt that "Opvs Contra Natvram" is BEHEMOTH's strongest and most sophisticated musical collection to date.

BEHEMOTH are not only the creators of Poland's extreme metal scene, but they are masters of their vision and showcase what a band can achieve when the brakes are off. With "Opvs Contra Natvram" they have created 10 fresh chapters, created at a very strange time for the world. Their goal to create something new, something that doesn't sound like anything that has gone before, was an ambitious one.