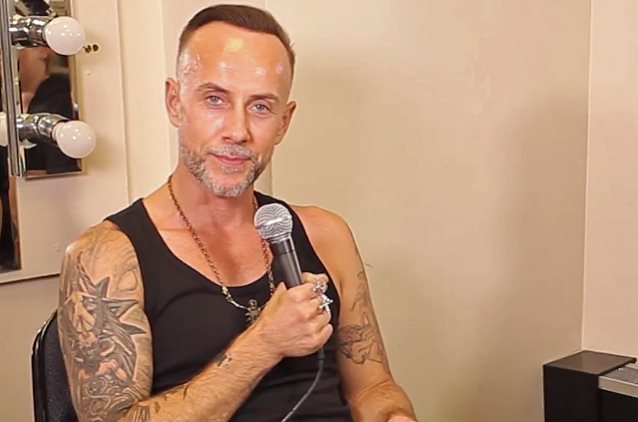 BEHEMOTH Has 'Nothing To Lose' As Opening Act For SLAYER, Says NERGAL

A lucky 70000 Tons Of Metal "survivor" was selected to interview BEHEMOTH frontman Adam "Nergal" Darski for 70000tons.tv's #SurvivorsAsk at the New York City stop of the band's North American tour with SLAYER and LAMB OF GOD. You can now watch the chat below (starting at around the four-minute-thirty-second mark).

Asked what it has been like for BEHEMOTH to open for bands like SLAYER and LAMB OF GOD on the current tour, Nergal said: "It's good to be back in that position where you have nothing to lose. You are exposed in front of people who probably maybe heard about you, and there are some of the BEHEMOTH fans, but the majority is SLAYER and LAMB OF GOD fans. And you are there to fuck… You enter the stage like a hungry wolf and you have nothing to lose and you just fight for it — you know what I mean?"

He continued: "We are very violent and aggressive — I'd say more than at the regular headlining shows, where we are more in the safety zone: 'Okay, this is our headlining show. We are comfortable.' You know what I mean? We are, like, 'This is our people. Of course they're gonna scream for us. Of course they're gonna buy merchandise.' So it's good to go to the position where you must fight for it or you're gonna be missed out. And it's a very redefining position; you've gotta go back and see how it is, where you started, and you always start from scratch. It's a pretty exciting start."

BEHEMOTH has tapped former JOB FOR A COWBOY and SCORPION CHILD drummer Jon Rice for the tour with SLAYER and LAMB OF GOD. Rice is filling in for longtime BEHEMOTH drummer Inferno (real name: Zbigniew Robert Promiński),who stayed home in Poland in order to await the birth of his second child.

SLAYER's six-week expedition with LAMB OF GOD and BEHEMOTH kicked off on July 12 in Bemidji, Minnesota, and will conclude on August 20 in Phoenix, Arizona.

BEHEMOTH is continuing work on the follow-up to 2014's "The Satanist" album for a tentative fall 2018 release.

Last year, BEHEMOTH completed a North American tour where they played "The Satanist" in its entirety.