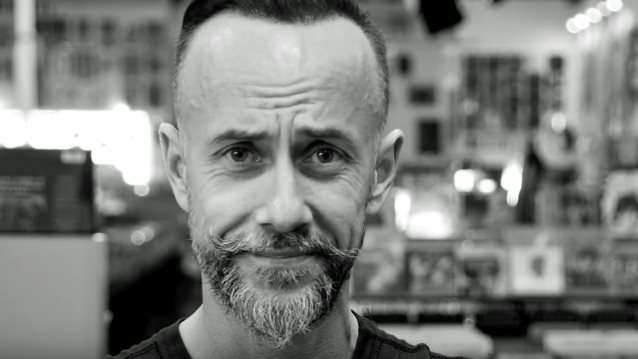 BEHEMOTH's NERGAL: 'What's In My Bag?'

Adam "Nergal" Darski of Polish extreme metallers BEHEMOTH is featured in Amoeba Music's "What's In My Bag?" segment in which he talks about some of the records he is into. In the clip below, he can be seen shopping at Amoeba in Hollywood, where he talks about one of the first rock and roll bands he fell in love with and shares how he was inspired by Mark Lanegan's brand of modern blues music.

Nergal's "blues, country and folk" project ME AND THAT MAN will release its debut album, "Songs Of Love And Death", on March 24 via Cooking Vinyl. The BEHEMOTH frontman is joined in ME AND THAT MAN by British/Polish musician John Porter on guitar and backing vocals.

BEHEMOTH last year completed a North America tour where the band played its latest album, "The Satanist", in its entirety. In addition to the concert, fans also had the chance to view "The Congregation" exhibition at each venue. Dubbed "a symbiosis of BEHEMOTH and Toxic Vision," the display showcased the collaboration between the two parties.