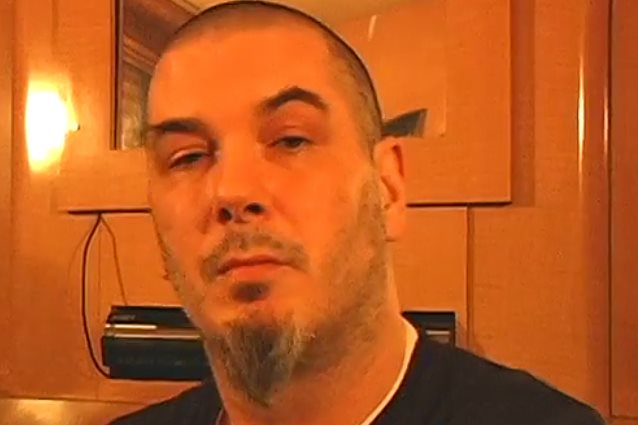 On January 12, Robb Chavez of cult TV show "Robb's MetalWorks" conducted an interview with SUPERJOINT members Philip Anselmo (vocals),José Manuel Gonzalez (drums) and Stephen Taylor (bass) at the Grizzly Hall in Austin, Texas. You can now watch the chat below.

Speaking about the lyrical themes covered on SUPERJOINT's new album, "Caught Up In The Gears Of Application", Anselmo said: "Really, honestly, it's taking a good, cold stare at modern technology and how it has affected the business of music, of communication between people, of a lack of communication between people. Some people call it… actually, I believe it's literally called social media, now isn't it? It's antisocial media, is what it is. Everybody's at home, behind the computer screens, hiding, typing away things they would never say to somebody's face. It's very hard to interpret black-and-white writing. Like, is there a joke there? Is there a sense of humor there?"

According to Anselmo, he doesn't spend his time reading online comments or posting responses to the things people write on the Internet. "I'm off the fucking grid," he said. "I don't do social media. And anybody out there that thinks I'm tweetin' you something or Snapchattin' you or fucking Instagrammin' you, you're fucking really… It ain't me! I'm fucking grinding it out with these motherfuckers, man. That's all I do — write music. Fuck!"

Philip also once again reiterated his point of view that the present-day Internet culture has succumbed to what some people have called "the law of digital Darwinism," or the survival of loudest and most opinionated.

"Honestly, I don't believe in it," he said. "I don't. I think a lot of it's manufactured outrage. I guess I have too much faith in mankind, and womankind, and people — let's just be right here. I'm trying not to use the word 'politically correct,' but let's be honest… people. I have too much faith in people, and I know that when I close the damn laptop and step outside and I get into the real world, and I'm at airports, I'm at horror conventions, I'm at rock shows, whatever, everybody sure is nice, eveybody sure gets along, it seems. It's, like, there's an online community, and then there's the real thing. That's just how it seems to me. Maybe I'm wrong. I've been wrong before. [Laughs] Boy, have I."

"Caught Up In The Gears Of Application" was released on November 11 via Anselmo's Housecore record label.