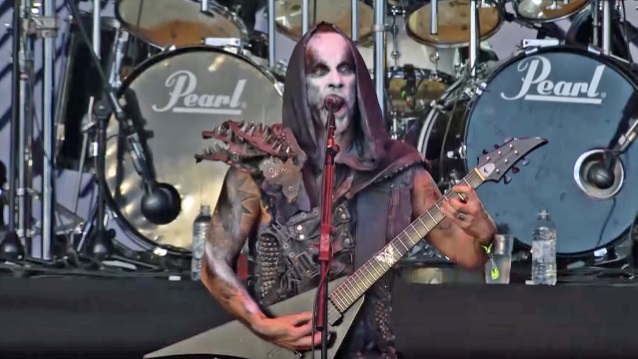 The Polish extreme metallers are planning to enter the studio by the end of the year to begin recording their new album for a tentative fall 2018 release. The follow-up to 2014's "The Satanist" will mark the band's first effort since Nergal completed an LP and a short tour with ME AND THAT MAN, his blues, country and folk side project with British/Polish rock musician John Porter.

In an Instagram note accompanying the clip of a new song, Nergal writes: "We have plenty of music we are excited about. It's way too early to make any statements, but soon we'll give you some more insight into what's happening in the BEHEMOTH camp.

"We are officially done with rehearsing new tunes. How does it sound for you?"

Nergal told BlackCraft this past summer that BEHEMOTH had "a shitload of stuff written" for its next album. "I've never been that creative in years," he explained. "We've got ten or twelve songs nailed, pretty much, and there's a lot of [other] stuff written and I'm going through lyrics now. And, actually, [for the] first time ever in our history, in our career, we are working on tour. So we've got this mobile studio and we just fuck around with ideas, with the songs, we go through leads, we practice, we revisit old demos, we try to perfect it and just make it as supreme as we can."

Asked if BEHEMOTH approaches the songwriting process with the intent to push the boundaries further after setting the bar higher with each album, Nergal said: "Yes. I mean, you've gotta do it. But I don't really see BEHEMOTH trying to race with itself. The thing is not really to jump over that bar now, it's just to set it somewhere else, in a different spot. It's like imagine eight-thousand-meter peaks, because there's no nine thousand meters; you've got like a few that are tops of the world, right? So imagine these few eight-thousand-meter tops. We climbed one of them and there's a few more left. So we won't be just trying to find another way to go the same way; we're gonna climb another one. We did Mount Everest; with the next album, we're gonna do K2, and so on and so on. But it's a whole new, different approach, it's a different mountain, it's a different challenge. So I don't wanna go back there, because I've already been there, I've already conquered that mountain. But there's a few more to conquer, so let the challenge begin, and let's fight for it. That's it."

Before the release of BEHEMOTH's next studio effort, fans will receive a "massive" concert DVD and album recorded during "The Satanist" tour, according to Nergal. There will also be a video for another track off "The Satanist", to be included with the DVD.

We have plenty of music we r excited about... it’s waaay too early to make any statements BUT soon we’ll give u some more insight into what’s happening in the @behemothofficial camp. We r officially done with rehaersing new tunes... how does it sound for u, hm?😉