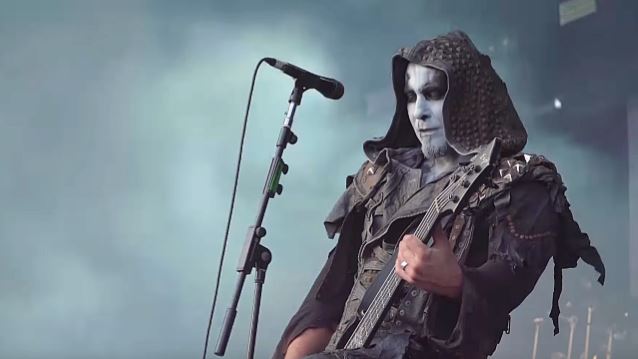 BEHEMOTH Will Take 'A Long, Long Time' To Make Sure Next Album Lives Up To Expectations

PlanetMosh TV conducted an interview with bassist Tomasz Wróblewski (stage name Orion) of Polish extreme metallers BEHEMOTH at this year's edition of the Bloodstock Open Air festival, which was held August 11-14 at Catton Hall, Walton-On-Trent, West Midlands, United Kingdom. You can now listen to the chat in the YouTube clip below. A few excerpts follow (transcribed by BLABBERMOUTH.NET).

On BEHEMOTH's plans for the coming months:

Orion: "We've been on tour with 'The Satanist' for almost three years now, and we feel that it's the end of the cycle for us. So we're gonna take some time off, but during this time we're probably gonna be rehearsing and working on new material anyway. So it's not real time off. But we're thinking about some vacations for each of us separately here and there. The next year is writing and probably recording. We'll be doing a few festivals in the summer 2017, but just a few."

On whether BEHEMOTH works well under pressure:

Orion: "I wouldn't say we work well under pressure, 'cause somehow we've managed to push all the pressure off us, and we're trying not to get into a situation where we're pressed to do anything. I mean, sometimes it happens, but we don't really have to do it that much. But, yeah, we definitely need some good balance between touring and the life at home. We need to get into a certain mindset just to do a new thing, just to start a whole new story."

On whether BEHEMOTH fans can expect to see the new album in 2017:

Orion: "I think there will be a new album. I mean, you can never know. We started to jam, to work on some riffs, some songs, some ideas, but we're still talking about that. That's gonna take… In our case, that's a long, long time, long process to make things happen, and we're not really ashamed to say that we take months, half a year, a year for the whole process. So it's rehearsing, it's writing, it's recording, it's producing, then it's releasing the album. We're one of these bands who can do this within two months. We just can't. There's people who are better than us. We can't do this. So we are planning on doing the new album next year. This is the plan. Let's see what happens."

Orion: "This is why 'The Satanist' release was postponed for such a long time. 'Cause we were mixing the album, and right at the very end, we decided that we had to mix it all again. We had tours planned, we had a release date... We canceled everything, 'cause we just found ourselves in a situation where we were not entirely happy with what we had. So we found another person to produce it, and we started the whole work again. So, yeah, we're this kind of people — we work on things until we're happy with what we have."

BEHEMOTH completed a North America tour this past spring where the band played "The Satanist" in its entirety. In addition to the concert, fans also had the chance to view "The Congregation" exhibition at each venue. Dubbed "a symbiosis of BEHEMOTH and Toxic Vision," the display showcased the collaboration between the two parties.