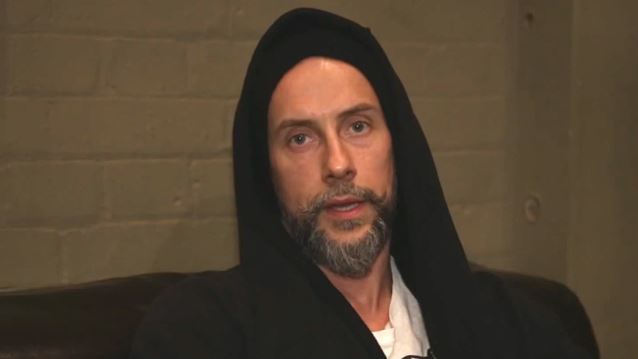 Guitarist/vocalist Adam "Nergal" Darski of Polish extreme metallers BEHEMOTH spoke to UK's Metal Hammer magazine about the group's May 2014 tour of Russia which was cut short when he and his bandmates were ordered to leave the country after allegedly violating Russia's visa regulations.

"Russia definitely was an important in our… in ['The Satanist'] album cycle and also in the band's career, because, after completing four successful tours in Russia, we did one uncompleted and not very successful tour in Russia, which was the 'Russian Satanist Tour'," he said.

"We managed to play four shows out of thirteen shows, and there were so many forces struggling us and trying to stop us on our way to finish the tour that we had to give up, basically, when they put us behind bars and literally forced us to leave the country. We couldn't hit that wall anymore, so we just gave up and came back to Poland, and we actually got banned for five years to enter Russia. But it was also a very important moment in the album cycle."

He continued: "I'm cooled down now and more relaxed about it, so I'm not as annoyed and infuriated as I was back then. But, yeah, let's just wait for better times there, because I, honestly, love the people there. And it's good crowds and it's amazing people. I love Russians. It's just the little fact that they have an idiot as a leader of the country. But then, things don't last forever, so we should just wait for better times and eventually we're gonna make it back there even bigger than so far."

BEHEMOTH's concerts in Khabarovsk, Tomsk, Novosibirsk and Krasnodar were canceled following a string of protests by Christian activists. According to The Moscow Times, unidentified thugs prevented the musicians from taking the stage in Novosibirsk and beat up concertgoers, local media reported.

A Russian video report can be seen below.

BEHEMOTH is far from the only rock band to have run into problems in Russia recently. Back in June, shock rocker Marilyn Manson was forced to cancel his show in Moscow due to a bomb threat while another concert in Russia was scrapped over fears his performance would insult Orthodox believers and promote sadomasochism.

18 CANNIBAL CORPSE fans were arrested in St. Petersburg, Russia in October as they were protesting against the last-minute cancelation of the band's concert at the Kosmonavt music club.

CANNIBAL CORPSE's tour of Russia kicked off on October 2 in Krasnodar and was scheduled to include eight concerts. However, only four shows went ahead as planned, with the band's October 5 gig in Ufa getting axed when the venue abruptly closed "for technical reasons." CANNIBAL CORPSE's October 10 concert in Nizhny Novgorod was shut down by armed masked police officers 30 minutes after it had started. A number of fans were detained and taken for compulsory drug tests.