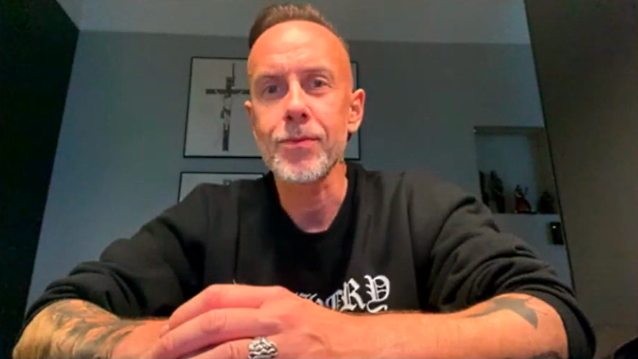 BEHEMOTH's NERGAL On Coronavirus-Related Music Business Shutdown: 'This Is What It Is Now. Deal With It.'

In a new interview with Terry "Beez" Bezer of Knotfest.com's "Mosh Talks With Beez", BEHEMOTH frontman Adam "Nergal" Darski spoke about how he is dealing with the coronavirus crisis and what the touring circuit might look like post-pandemic. He said (see video below): "I'm an optimist, but I'm also a big realist. I don't think anything happens until mid-2021. I think maybe full-on we're back in business in 2022, which I hope for. But this is what it is now. Deal with it. We've got new circumstances, we've got a new environment. So you can either just sit and whine and cry like a baby, or you can do something with the situation and just fucking bust your balls, bust your creativity and deliver something out of this world. Because this world is somewhere else now. It feels like we're on a different planet. There's so many limitations that we're, like, 'Holy shit! Is this what my life is gonna be from now on?' So, considering this, which is not what we're used to, we can either accommodate or just step aside. So BEHEMOTH, obviously, will accommodate, but on its own terms."

Earlier in the month, BEHEMOTH announced "In Absentia Dei", a groundbreaking immersive livestream spectacular which will broadcast on September 5 from a secret church location in Poland. The event will be streamed in high-definition 4K, with an immersive experience option, allowing viewers to choose from eight different camera angles in the multi-camera shoot or watch the "Director's Cut." Tickets for this theatrical extravaganza are available now at www.behemoth.live. Parts of the performance may offend, so the footage is only recommended for fans 18+.

BEHEMOTH's latest EP, "A Forest", was released in May via Metal Blade. The EP's title track is a cover of THE CURE classic, and it features a guest appearance by SHINING frontman Niklas Kvarforth. The "A Forest" EP also includes a live version of the title track as well as two songs from the "I Loved You At Your Darkest" sessions.