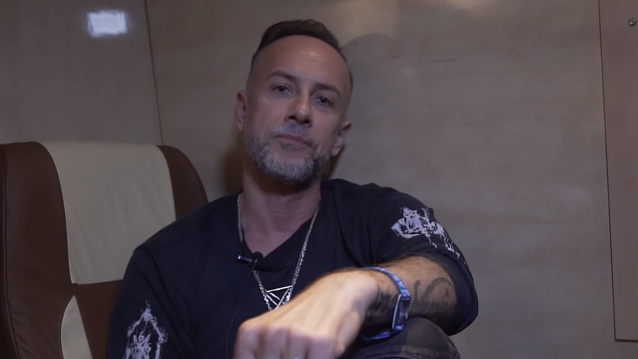 BEHEMOTH frontman Adam "Nergal" Darski says that he has had a fantastic time opening for SLAYER on the latter band's farewell tour. "Man, I've been such a fanboy, and I still am," he tells Australia's Heavy (hear audio below). "And when I'm on tour with them, trust me — every day, I go out and watch the whole set. It's insane. SLAYER is one of these bands that I can watch over and over again. And I guess I have the same [feeling] with Nick Cave and DEPECHE MODE and some other bands. I always come back and I always watch them. And it never gets boring."

Nergal admitted that seeing SLAYER on tour one last time has been a bittersweet experience. "Well, on one hand, it is sad," he said. "But then, just to quote this really cool DANZIG song: maybe it's better leave while your song still calls than get old and boring and slow and stuff. And trust me, SLAYER are on fire — literally too. Because their set is fucking in-fucking-sane. Go and see that, because I'll be there at the side of the stage screaming, 'Angel of death!'"

Last year, Nergal called touring with SLAYER "a dream come true. And hey, I'm 41, I've been running this band for, what, over 25 years?" he said. "And I've been around; we've done shows with some big bands, but I'm a fanboy. I'm a huge admirer of the scene, and SLAYER is a huge part of the scene. So being part of this tour  —  already historical, because it's a farewell tour — we're already in the books forever.

"So they are like the pioneers, right? One of the very first bands to define extreme metal. They're still here, and at the peak of their career now. This tour is outselling the famous 'Clash Of The Titans' tour from the early '90s, which is fuckin' incredible. This is the proof that SLAYER is the No. 1 extreme metal band on the planet, and I'm not even trying to be nice — I don't need to lick anybody's ass — I'm just happy to be on the bill with this awesome band."

BEHEMOTH is continuing to tour in support of its latest album, "I Loved You At Your Darkest", which was released in October via Metal Blade Records in North America and Nuclear Blast in Europe

Listen to "BEHEMOTH's Nergal Chats Light And Dark And Farewelling To Slayer" on Spreaker.
Find more on Behemoth