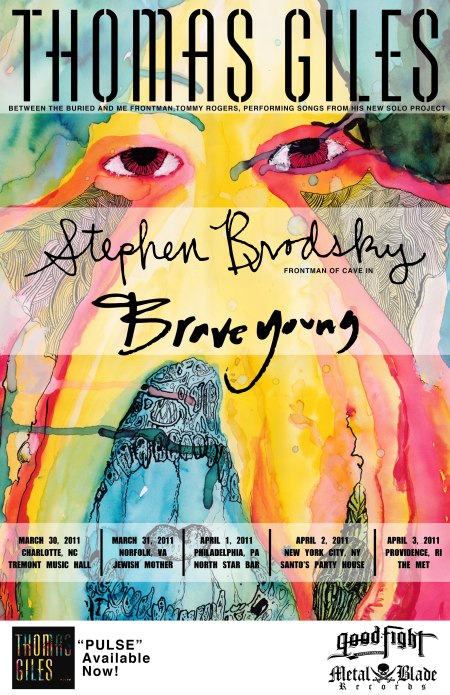 BETWEEN THE BURIED AND ME Vocalist Announces U.S. Dates In Support Of Solo Album

Tommy Rogers, lead vocalist, keyboardist and founding member of the award-winning North Carolina progressive rock band BETWEEN THE BURIED AND ME, has announced special U.S. tour dates in support of his just-released solo album, "Pulse". The versatile frontman/multi-instrumentalist who uses the pseudonym Thomas Giles (his given middle name) on the record, will perform songs from the new release backed by a hand-picked live band. Support on the mini-tour will be provided by Steven Brodsky (of CAVE IN) and BRAVEYOUNG.

"I never thought that tour dates for 'Pulse' would see the light of day and now, here they are!" commented Rogers. "Come out and hang!"

Tommy Rogers has met to shining critical acclaim for his efforts on "Pulse", a recording which he not onlyself-produced, but arranged, composed and played every instrument on, marking the album as a true solo effort (in every sense of the word). The album has been hailed as "an alternately lovely and chilling record" by Alternative Press, a record "that should captivate fans of adventurous music" by Verbicide and "a powerhouse album of progressive and experimental rock" by Popmatters.

Thomas Giles' "Pulse" is a challenging rock record designed so that the parts build up to a larger, cinematic-like structure where everything from production to arrangements to lyrics to album art is carefully crafted towards a unified purpose. Testing the limits of what he can do naturally with his voice, Rogers' strikingly beautiful falsetto and dynamic range conjures tales of anxiety, collapse, end-times and strength against swelling, heart-lifting arrangements and pristine backdrops of ambient loops, digital burbles, analog hiss and woozy drones. Exploring combinations of the outré genres of both post-rock and glitch, the music's emotionally resonant yet textural sounds draw reference to artists such as NINE INCH NAILS, RADIOHEAD, MUSE, THE VERVE, BECK and SPIRITUALIZED, balancing both rock and electronic impulses.