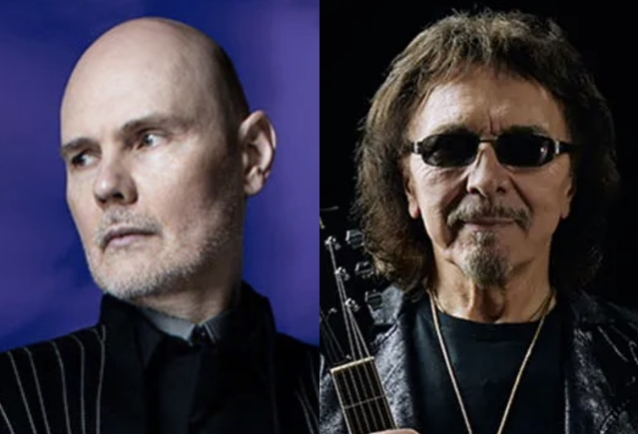 SMASHING PUMPKINS frontman Billy Corgan, considered by some to be an underrated guitarist who deserves much more credit than most of the artists that emerged from the 1990s, spoke to Kerrang! magazine about where he finds the inspiration to come up with new guitar riffs. He said: "It has to be fresh. Tony Iommi from BLACK SABBATH, he's my hero, and Tony wrote those riffs that, when you hear him, it's like a movie. In my mind, I always call it 'Cosmic Sabbath'. When I would listen to SABBATH, I felt like I was peering into the universe. That's the way it made me feel, even as a little kid. So for me, a great riff has to kind of make you feel something bigger. So if I'm not in the mood, it just feels weird. There's the thin line between cartoonish and owning the space. Bands like [JUDAS] PRIEST and SABBATH, and even ACCEPT — which the riff [of the new SMASHING PUMPKINS single 'Beguiled'] reminds me a little bit of — [they all have] something about fucking owning the metal. It's like, you've gotta believe it."

Corgan was a guest vocalist on the song "Black Oblivion" which appeared on Iommi's 2000 solo album, "Iommi".

"Beguiled" is the first single from SMASHING PUMPKINS' upcoming album, "Atum: A Rock Opera In Three Acts". The 33-track collection, whose title is pronounced "autumn," is being billed as a sequel to 1995's "Mellon Collie And The Infinite Sadness" and 2000's "Machina/The Machine of God". The LP will be released as three 11-track "acts", eventually culminating in a three-act rock opera. Act 1 of "Atum" will arrive on November 15, 2022, Act 2 on January 31, 2023, and Act 3 will be made available, along with a special-edition box set featuring all 33 album tracks plus 10 additional unreleased songs, on April 21, 2023.

"Atum: A Rock Opera In Three Acts" was written and recorded over a four-year period by Corgan and the rest of the current SMASHING PUMPKINS lineup: guitarists James Iha and Jeff Schroeder, plus drummer Jimmy Chamberlin.

Next month, SMASHING PUMPKINS will embark on a fall 2022 North American tour, dubbed "Spirits On Fire", with JANE'S ADDICTION.