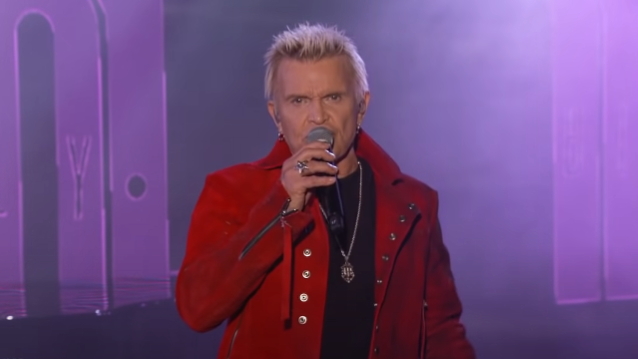 Billy Idol has canceled his previously announced appearances at the Shaky Knees festival in Atlanta and at Hard Rock Live in Hollywood, Florida.

Earlier today, the 66-year-old rocker released the following statement via social media: "Due to my continued sinusitis infection, I'm disappointed to announce that I must cancel my appearance at both Shaky Knees in Atlanta on April 29 and at Hard Rock Live in Florida on May 1.

"When we confirmed these shows I was sure that I would have recovered in time to play, but unfortunately this infection has proven pesky and lingering, requiring some more time before I get back out on the stage.

"To all the fans who were looking forward to these gigs, I'm very sorry to miss them. Cancelling shows is not something I do casually.

"We'll no doubt come back to Georgia and Florida another time soon. Sincerely, BFI."

Idol's decision to scrap the shows comes less than two months after he pulled out of his previously announced tour with JOURNEY in order to undergo surgery for a chronic sinus infection.

Billy, who burst on to the scene in the 1980s, was scheduled to support JOURNEY on the "Freedom Tour 2022" beginning on February 22 and ending on April 5, after which TOTO was slated to fill the opening slot. As a result of Idol's cancelation, TOTO is now supporting JOURNEY on the entire tour, which will end on May 11 in Hartford, Connecticut.

In December, Billy canceled his appearance at the third "Above Ground" benefit concert after catching a "respiratory cold."

For 45 years, Idol has been one of the faces and voices of rock'n'roll, with an artistic resume to match the brilliant light of the image. First as the camera-ready frontman for GENERATION X, between 1977 and 1981 Idol emerged with three albums that made positivity, emotional depth, and high pop synonymous with punk rock. In 1982, Idol embarked on a remarkable transatlantic/trans-genre solo career that integrated clubland throb, wide-screen depth and drama, rockabilly desperation, the bold and simple lines of punk, and rock'n'roll decadence.

Due to my continued sinusitis infection, I’m disappointed to announce that I must cancel my appearance at both Shaky...