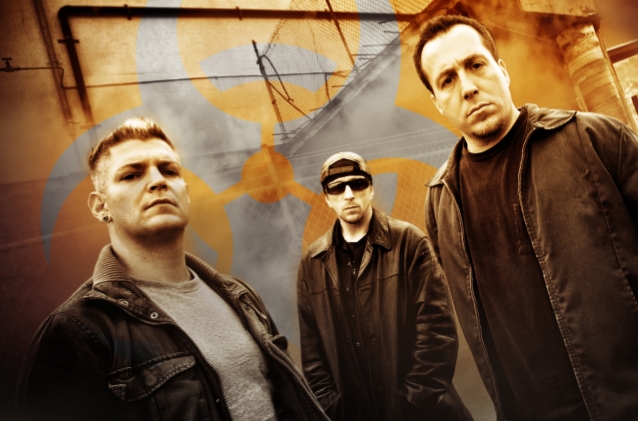 BIOHAZARD Is 'Not Over,' Says BILLY GRAZIADEI

Billy Graziadei says that BIOHAZARD is "not over," despite the fact that the band hasn't played any shows since 2015.

The group, which is acknowledged as one of the earliest outfits to fuse hardcore punk and heavy metal with elements of hip-hop, has been out of the public eye since Scott Roberts left the band nearly three years ago.

Roberts, who played guitar on BIOHAZARD's 2005 album "Means To An End", rejoined the group in June 2011 as the replacement for bassist and co-vocalist Evan Seinfeld. Scott fronted BIOHAZARD for nearly five years before exiting the band in February 2016.

Asked by Germany's Moshpit Passion about BIOHAZARD's current status, Billy said (see video below): "I talk to Bobby [Hambel, guitar] and Danny [Schuler, drums] all the time. I just played with Danny a couple of weeks ago with SICK OF IT ALL and LIFE OF AGONY. There's still a BIOHAZARD. It's a different kind of band. POWERFLO and BILLYBIO is a a little bit more organized, but BIOHAZARD is more like a vibe. Like the planets, when everything aligns, we do something. Until then, who knows? But we're not over. We talk all the time. We write music together. We share things. When it's right, it's right, and there'll be a new BIOHAZARD record."

Last November, Billy told Mass Movement that BIOHAZARD has yet to find a replacement for Scott. "We had a couple of ideas, and it didn't work out," he said. "I became focused on [POWERFLO and my solo project]. The other guys have their families, as I do. I talked to the guys before I left, and we talked about some other ideas, but right now, there's just nothing going on."

Graziadei said that he no longer has any contact with Seinfeld, who left BIOHAZARD more than seven years ago after fronting the group since its 1987 inception. "I haven't talked to him since he quit the band a long time ago." Billy said. "I was a little bit… I would say 'bitter,' but hurt. But I think he quit the band years before he actually physically quit. But I wish him well. I don't have any ill thoughts on that situation. We moved on. And Scott was a great addition to BIOHAZARD, but he also quit."

Back in 2017, Roberts dismissed as untrue Graziadei's claim that he left BIOHAZARD because he was making more money working as a rigger in New York. He explained: "I was okay with losing money on tour as long as I was enjoying myself. I would have kept doing that. The real problem was I wasn't getting along with one of the members and wasn't enjoying myself on tour with them anymore. The only other reason for me to keep doing it, was to make a new record that I was into and proud of. When another member of the band made it clear to me that wasn't going to happen, there was no reason for me to do it anymore. That's the simplest way I can explain it."