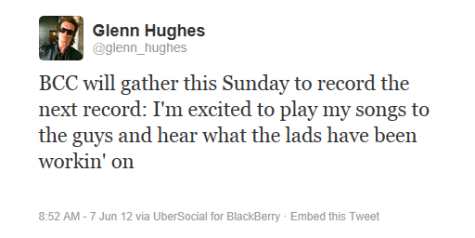 "With this next album, I've had the luxury of being able to write for six months," Hughes recently told GuitarWorld.com. "With the first album I had six weeks, and the second one was about four months. But I've had a lot more time to write this one. If you look at Joe's schedule, he doesn't even have time to wipe his nose. I've been left as the keeper of the keys to write these albums."

In a recent interview with Artisan News, Hughes stated about BLACK COUNTRY COMMUNION's musical evolution, "We just did two albums back to back, both successful records. And our live DVD is out now.

"We're really, really happy with the progress of where we're going musically. So we're sort of on course now."

Regarding the sound of the forthcoming BLACK COUNTRY COMMUNION CD, Hughes said, "It's kind of a continuation… There's gonna be some darker stuff on there, because the lyrics I'm writing are kind of dark. There may be some moments of drama in there — I like drama in the music. So the songs I have ready are definitely a continuation of [the first and the second albums]."

BLACK COUNTRY COMMUNION released its first concert DVD, "Live Over Europe", on October 24, 2011 (Blu-ray followed on November 15) on the J&R Adventures imprint. The two-DVD live set was filmed with 14 HD cameras and 5.1 Surround Sound during the band's debut tour in the summer of 2011. Over three nights, playing to packed venues in the German cities of Hamburg, Munich and Berlin, the 18-song set list (17 originals and one cover) hits on both of BLACK COUNTRY COMMUNION's albums — 2010's debut and 2011's sophomore release "2".

BLACK COUNTRY COMMUNION initially came to fruition when producer Kevin Shirley saw Hughes and Bonamassa join forces on stage in Los Angeles in November 2009 for an explosive performance at Guitar Center's King of the Blues event. Shirley then recruited Bonham and Sherinian for the project, which is named after the industrial area in the British Midlands where both Hughes and Bonham were born and raised.