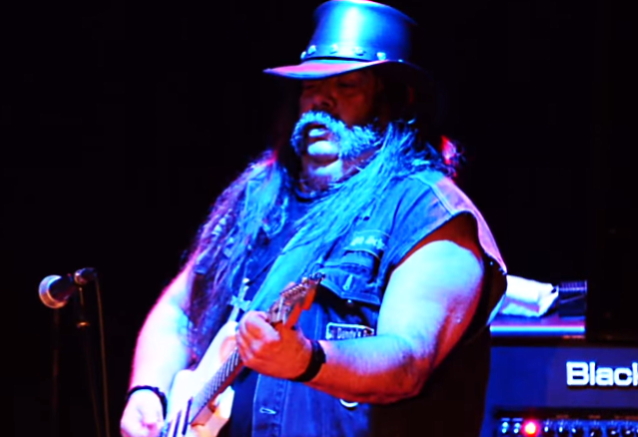 According to TMZ, Rickie Lee Reynolds, the longtime guitarist for BLACK OAK ARKANSAS, the southern hillbilly psycho-boogie band with over 50 years of history, has died. He was 72 years old.

Reynolds passed away Sunday morning (September 5) in a hospital, where he was battling long-term health complications.

BLACK OAK ARKANSAS has had an unbelievable streak of bad luck. Aside from divorces, drugs and near-death car wrecks, members of BOA faced jail time and homelessness. The band went through years of lawsuits with former management. Accusations flew everywhere. Millions of dollars disappeared. When their band compound burned to the ground, singer James L. Mangrum (a.k.a. Jim Dandy) was investigated on suspicion of arson and fraud. Early in their career, members formed a corporation, giving away power of attorney, with the aim of sharing their gains equally. Business and brotherhood were great for years.

However, in the late 1970s when members tried to leave, problems arose. Drummer Tommy Aldridge had tried to leave BOA, but was not allowed. He finally snuck out of the band compound in the middle of the night and ended up suing band and management for his release. Bassist Pat "Dirty" Daugherty was arrested and served time in prison for drug possession after he left the band. Guitarist Harvey "Burley" Jett, who wanted to leave to begin a ministry upon finding Christianity, settled in a court to give up his land, home and royalties in exchange for his freedom. Legal battles continued, with both sides unable to make peace.

For Mangrum and Reynolds, the final straw came when they helplessly watched as, in an unprecedented move, the entire BOA publishing catalog was sold on eBay.

Headlining arenas in the 1970s with opening acts such as Bruce Springsteen, AEROSMITH and THE EAGLES, BOA destroyed over 1000 stages from '72 to '76. They became one of the Top 5 touring acts in rock, earned three gold albums, sold close to five million records, and became the largest private landowners in Arkansas. They gave millions to Arkansas charities and gave then-attorney general Bill Clinton and wife Hillary their first limo ride.

Boasting the first-ever three-guitar lineup, BLACK OAK were an explosion of sex, sweat, scrubboards, bare-handed drum solos with a guitar-destroying ritual as their live climax. David Lee Roth, Vince Neil and Axl Rose all took pages (some say stole) from Dandy's onstage persona. However, in the 21st century, it's been punk and metal bands that have discovered and embraced BOA. BLACK FLAG, SUPERSUCKERS, BUTTHOLE SURFERS and PANTERA can be counted as fans.

Through triumphs and tragedies, the OAK has stood strong. Bad luck, lawsuits and women couldn't keep a fighter like Dandy down. In the mid-1990s, Mangrum, Reynolds and Daugherty reformed the band and they had been on the road since.

BLACK OAK ARKANSAS has donated many hundreds of thousands of dollars to charities in its career, and both the mayor of Little Rock and the governor of the State of Arkansas even declared a "Black Oak Arkansas Day". There is now a permanent display in the Arkansas State Museum and the Barton Coliseum in Little Rock, Arkansas dedicated to the band.