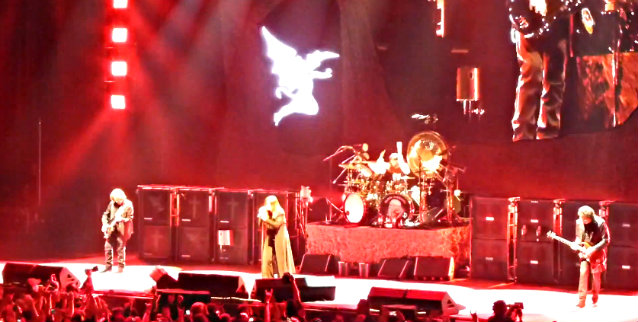 Fan-filmed video footage of BLACK SABBATH's December 4 concert in Frankfurt, Germany can be seen below.

According to The Pulse Of Radio, BLACK SABBATH guitarist Tony Iommi is not sure if making a follow-up to this year's reunion album, "13", would be a good idea for the group. Iommi said in Revolver magazine, "I don't know if that would be an anticlimax if we wrote another album. I'd like to, but we haven't actually spoken about it, you know? I don't know if that would be a good idea after this one, because this one's done so well. I'm sure we'd all like to do one. But I don't know. Maybe I should talk to the others about it."

BLACK SABBATH will return to North America in 2014 for 10 shows that will be among the last in support of "13".