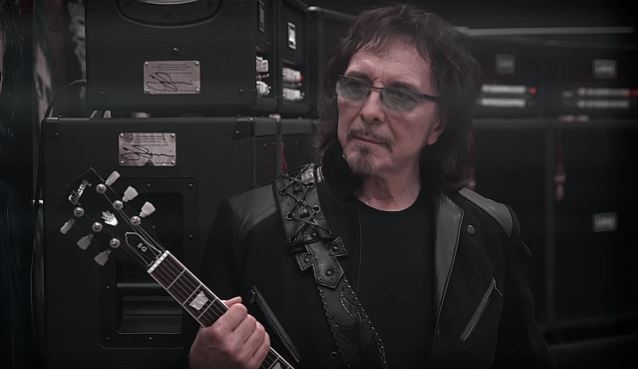 Tony Iommi has revealed that his cancer is finally in remission.

The legendary BLACK SABBATH guitarist confirmed the news as he unveiled a plaque at the hospital where he has been receiving treatment for his illness.

"I came back to hospital straight after we finished a round of European tour dates, and the good news is that everything is alright up to this point," he told the Birmingham Mail while unveiling the Macmillan Quality Care plaque at Solihull, England's Spire Parkway Hospital.

"I am in remission and hopefully, this situation will continue.

"The chemotherapy and the follow-up treatment appear to have done the trick — but I'm aware that it could come back one day.

"I have a blood test every six weeks at my GP's, and I come in here at regular intervals for check-ups. That's something that I'll have to live with for the rest of my life, looking for any warning signs that it might be rearing its ugly head again.

"But the availability of a facility like the Specialist Care Centre makes it so much easier. They’re all lovely here!"

The 68-year-old rocker attended said that Spire is a vital resource for cancer sufferers in the Midlands region of England.

He explained: "When you have an illness such as cancer, it is important that the inevitable anxiety associated with a hospital visit is eased.

"The new center, which is separated from the hospital, offers a warm and welcoming environment.

"All the staff are friendly and helpful. You can talk to them about any concerns you may have, about your treatment or just about life in general, which is sometimes exactly what you need.

"I can't thank them enough for what they have done for me, and others like me."

SABBATH will make their final visits to Mexico and South America at the end of the year as they wind down their farewell tour.