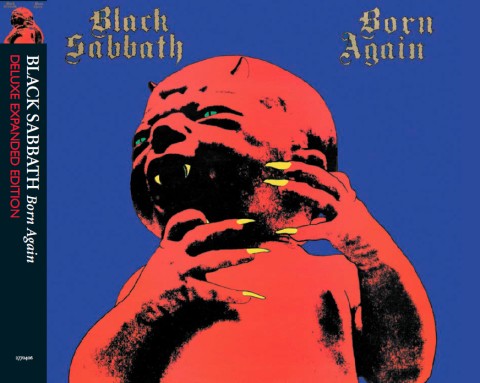 Joe Siegler of the unofficial BLACK SABBATH web site Black-Sabbath.com has revealed more details about the forthcoming deluxe-expanded-edition reissue of BLACK SABBATH's "Born Again" album, which is due in the U.K. on May 30 via Sanctuary. He writes, "It's been heavily rumored for some time now that 'Born Again' was getting a little extra treatment. In the Universal Deluxe Edition series, they went from 'Heaven And Hell' / 'Mob Rules' / 'Live Evil' to the release batch that had 'Seventh Star' and 'Eternal Idol' (November 2010). Then in February 2011, they did 'Dehumanizer'. 'Born Again' got skipped over. I was told earlier in 2010 that 'Born Again' was going to be skipped (even before its turn in the original release order came up),because they were doing some extra work on it, hence the extra time, or 'delay.' I later came to believe from a couple of sources that it was because it was finally getting the legendary 'proper mix.'

"You've all heard the stories about Ian Gillan's hearing the final mix and throwing up. Well, the rumors go that the 2011 release of the album would do away with Mr. Gillan's propensity for vomiting in regards to the final mix.

"When the news broke of what is going to be on the 'Born Again' two-CD Deluxe Edition a couple of days ago, I decided to look into the status of the original album's representation in the package. Much to the disappointment of several people, I was told that the album was not remixed — it was just remastered. When I inquired why, I was told that they couldn't find the original multi-track master tapes that would be needed to do a remix. This was the primary reason for the delay, that they kept trying to track down the multi-tracks to do a remix, but could not. They couldn't delay the release indefinitely, so instead, they opted for a completely new remaster. The only other time the album was remastered was in 1996 for the Castle remaster series.

"It's disappointing yes, but all is not lost.

"[BLACK SABBATH guitarist] Tony Iommi's manager did go on to say this: 'The tapes have been held by a number of labels — Vertigo, Castle, Sanctuary, Universal, and moved around, which is why we still have hopes that they have simply been separated.'

"They haven't completely given up hope on the 'proper remix' project, which is good news."

Following the departure of lead singer Ronnie James Dio and drummer Vinny Appice after the studio mixing of the "Live Evil" album, BLACK SABBATH were once again on the lookout for yet another lead vocalist to fill the significant void left at stage front. The band turned to ex-DEEP PURPLE lead singer Ian Gillan.

The resultant album and live touring certainly made for one of the more curious associations in the world of heavy metal. Much of this era of BLACK SABBATH has passed into rock folklore and was actually the source for much of the material used in the rockumentary movie "This Is Spinal Tap". From the replica stage production of Stonehenge, which was too large for some of the venues on the world tour, to the employment of a dwarf to dress up and play the part of the "devil-baby" from the LP front cover, the world of BLACK SABBATH took on a distinct air of the surreal.

Whilst the well-received "Born Again" album and live dates succeeded in stoking the embers and kept the SABBATH flames burning, this would ultimately be a marriage built more on friendship and respect as opposed to any long-standing and compatible musical association. After one tour, Ian Gillan would eventually bid farewell and re-join his old sparring partners for the Mk. II reunion of DEEP PURPLE and leave BLACK SABBATH once more gazing into the crystal ball hoping the face of yet another lead vocalist would reveal itself.

For Iommi, Butler, Ward, Gillan, and keyboardist Geoff Nicholls, work would swiftly commence in May of '83 at the Manor Studios in the village of Shiptonon-Cherwell, Oxfordshire. Produced by BLACK SABBATH and co-producer Robin Black, who had also worked on 1975's "Sabotage", 1976's "Technical Ecstasy", and 1978's "Never Say Die", SABBATH's eleventh studio release would represent a radical departure from the gloomy atmospherics and blackened lyricism that had forged their identity and spawned innumerable descendants.

Gillan's approach to song-writing bespoke a lighter-hearted approach to what had, until then, been the primary concern of Butler. Album opener "Trashed", for instance, was inspired by Gillan's boozed-up race around the Manor's grounds in Bill Ward's car that ended in near-catastrophe and a wrecked vehicle. "Disturbing The Priest" was the result of a door in the studio having been left open during playback, and a local vicar appearing in the doorway asking for the volume to be turned down as it was disturbing choir practice in the adjacent village.

For all of its off-kilter appearance however, "Born Again" was still SABBATH through and through. Musically twisted and possessed with more than a whiff of brimstone, the album is a thrilling glimpse into an alternative world.

For this re-mastered Deluxe Expanded Edition, a second disc containing two bonus tracks is included, with "The Fallen" being a previously unreleased studio outtake recorded during the original album session. Also included are nine tracks from the BBC "Friday Rock Show" broadcast of BLACK SABBATH's appearance at the Reading rock festival in August 1983, which also includes a performance of DEEP PURPLE's classic "Smoke On The Water".