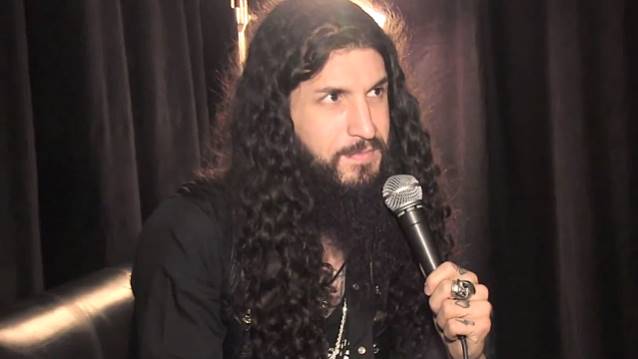 Jason Rockman, SLAVES ON DOPE singer and on-air announcer/host of "Amped With The Rockman" on the Montreal, Quebec, Canada radio station CHOM 97 7, conducted an interview with BLACK SABBATH's touring drummer Tommy Clufetos before the band's April 7 concert in Montreal. You can now watch the chat below.

On giving it his all while performing with BLACK SABBATH:

Tommy: "I give them all the respect in the world — Ozzy [Osbourne, vocals], Tony [Iommi, guitar] and Geezer [Butler, bass] — because I'm 34 now, and they're twice my age, and they rock harder than any 20-year-olds I know, and they go every night to the fullest. So it's what it's all about — it's giving it up for the people and for the show and the music, and it keeps you young."

On how he prepared for the BLACK SABBATH touring gig:

Tommy: "Oh, I just do everything I can. I'm not telling you any of my secrets, because I don't want people stealing my gigs. I just go over everything with a fine tooth comb over and over and over and try to get myself into the music and the spirit of what the music is all about the best that I can. So I do anything and everything to do so."

In a 2013 interview with Rhythm magazine, Clufetos explained why he took the BLACK SABBATH job despite fan disapproval, saying, "I look at it as an opportunity to play great music and experience something new. If I wasn't going to play drums, somebody else would have played… I understand all the mixed feelings and emotions. I totally get it. But I'm here to do the greatest job I can, and give people the experience of hearing those songs. I think I've done that. I think people have walked away enjoying what I've brought."

Clufetos did not play on the SABBATH reunion album, "13", a role that was filled by RAGE AGAINST THE MACHINE drummer Brad Wilk.

Singer Ozzy Osbourne told The Pulse Of Radio at the time that Clufetos was gong to play on the record until producer Rick Rubin stepped in. "Tommy was offered the gig until Rick Rubin came along," he said. "Rick Rubin didn't want Tommy, and nobody told… It was a bit of a communication breakdown. Tommy was on the side waiting, and it just didn't work out, you know. It works out in the end."

Although original BLACK SABBATH drummer Bill Ward was initially announced as part of the reunion in late 2011, he dropped out within a couple of months, saying he was offered an "unsignable" contract.

The members of SABBATH were reportedly concerned that Ward's health would not hold up on the road and allegedly asked him to accept the use of a second drummer on tour, which he refused.

In an e-mail to Billboard.com, Rubin explained that "Brad is a muscular drummer with great feel and understands the groovy nature of their music — RAGE AGAINST THE MACHINE is a groovy rock band, not a metal band — so it was worth a try. When they played together the first time, it was obvious he would do a great job in the seat Bill left vacated. Bill's a great drummer and I'm sure it would have been an amazing album with him. We all wanted him to participate."