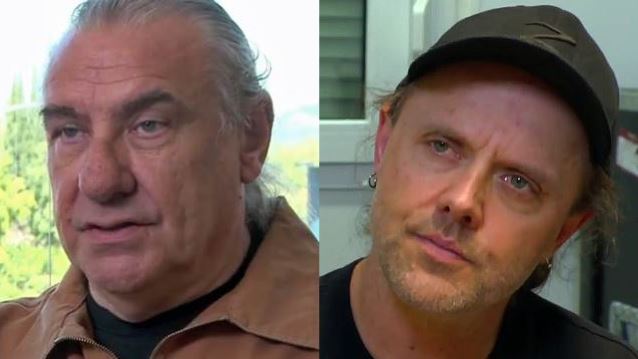 On this weekend's edition of his radio show "Rock 50", legendary BLACK SABBATH drummer Bill Ward paid tribute to METALLICA's Lars Ulrich. He said: "Lars is an exceptional drummer. He's spiritually sound. I really like that.

"A lot of the paths that Lars has passed through I've travelled myself. And I ended up with being able to take whatever my abilities are, and I was able to utilize that in whatever music we did with SABBATH or we're doing with my own bands now, or if I jam out with anybody, I just play whatever shows up. So it's, like, 'This is what I've got.' But I can remember going through a period over 20, probably 28, 25 or 26 years ago, where I stopped competing, so I had to find out what I could do and make good use of it. And it sounds like Lars has reached that settling ground as well. And I think he does such a good job of it.

"His drum creations have brought the sound of METALLICA to the very edge of metal spearhead, and he's worthy of much praise. He's inspirational and a must-listen for the students. So go ahead, students. If you are learning drums or need to learn the new techniques and stuff like that, listen to Lars, man. He's got some really good stuff that you can learn from."

After airing several METALLICA songs — including "Enter Sandman", "Master Of Puppets", "Until It Sleeps" and "All Nightmare Long" — Ward said: "There are so many things, drum-wise, in all of those songs that are departure points, where other drummers can look at it and go, 'Well, this didn't exist before.' Then Lars created it and we can all listen to it and go, 'Wow!' We can nick some stuff as well, you know. [Laughs] But I love the guy. I think he's just absolutely incredible."

He continued: "I sighed a deep sigh of relief when I heard [METALLICA's] 'black' album. Everything musically had seemed to be distorted feng shui until I heard Lars and METALLICA landing firmly with a statement that announced, 'This way.' And that's how it felt."

Ward added: "You know where the music scene was during the early '80s. Things were kind of, like, 'Oh, we've got this band, and we've got that going on.' And I was in bad shape. I was coming off SABBATH and we'd been through all the SABBATH years and touring and grinding. And so it was 1980 and I was just waking up into a new life, I guess, and I was listening around, looking around for music, and [a short time later] I heard a couple of METALLICA's early albums and then I heard the 'black' album, and I thought, 'Oh my god.' And it seemed to be like that was… it had the same effect that the 'white' album, THE BEATLES' 'white' album had on me. METALLICA's 'black' album, when I heard that and I heard Lars' playing, and I just was, like, you know, 'Wow! Something really neat's been accomplished here.' It pointed, 'This way, guys. This is the way we're going.' And it seemed like there was a multitude of music that followed that, and we've got this incredible heavy metal thing that we have today."

Check out a highlights video below.

You can listen to the entire show at this location.

"Rock 50" with Bill Ward is a monthly show that features hardcore and classic metal presented by one of the originators of the "heavy metal" sound, originating from the beautiful LA Radio Studio overlooking the L.A. Harbor in the historic Ports 'O Call Village in San Pedro, California.

SABBATH has used Ozzy's regular touring drummer Tommy Clufetos since then for live work. RAGE AGAINST THE MACHINE's Brad Wilk laid down the drum tracks on SABBATH's new album, "13", which came out in June 2013.