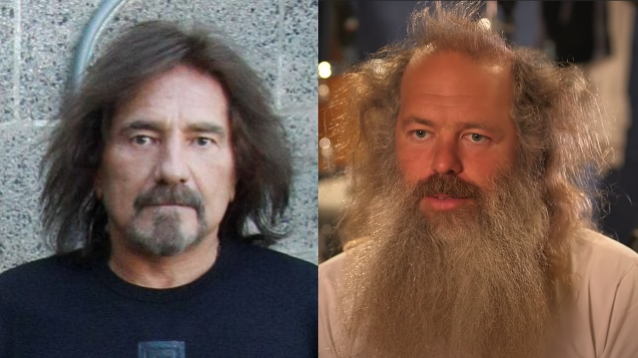 Speaking about working with legendary producer Rick Rubin, who is notorious for being very "in and out" of the studio while records are being made, Geezer said (as transcribed by BLABBERMOUTH.NET): "Some of it I liked, some of it I didn't like particularly. It was a weird experience, especially with being told to forget that you're a heavy metal band. That was the first thing [Rick] said to us. He played us our very first album, and he said, 'Cast your mind back to then when there was no such thing as heavy metal or anything like that, and pretend it's the follow-up album to that,' which is a ridiculous thing to think."

When host Eddie Trunk noted that many other artists who have worked with Rubin walked away from the experience feeling a bit underwhelmed, Butler said: "I still don't know what he did. It's, like, 'Yeah, that's good.' 'No, don't do that.' And you go, 'Why?' [And he'd say], 'Just don't do it.' I think Ozzy one day went nuts 'cause he'd done, like, 10 different vocals, and Rick kept saying, 'Yeah, that's great, but do another one.' And Ozzy was, like, 'If it's great, why am I doing another one?' He just lost it. And that's the way it was. Tony wasn't happy with some of the stuff he was trying to make him play. He was making Tony get 1968 amps — as if that's gonna make it sound like back in 1968. It's mad. But it's good for publicity and it's good for the record company. If you've got Rick Rubin involved, then it must be good, kind of thing."

In an official documentary chronicling the making of the "13" album, Geezer was more complimentary about collaborating with Rubin, saying: "It's great with Rick Rubin in charge. He's got a great track record and he comes up with some great ideas. Some work, some don't, but it's worth trying."

When Iommi was asked about working with Rubin in a 2013 interview with Guitar Player magazine, he said: "It was fine once we got used to him. We didn't know how he was going to work, because through the writing period, we didn't see a lot of him. He'd say, 'Phone me up when you've got an idea and I'll come down.' So we'd have a track together and phone him up or e-mail him, and then he'd come down and say, 'Yeah, I like this part, but I don't like that part' or 'I like everything,' whatever it may be, and then he'd go. He was only there perhaps ten or 15 minutes at the most. We didn't know how he was going to approach recording. It was all a bit of a mystery to us… It's sort of left to the last minute, and then he throws it at you. He just pushes that much more, and that's difficult for a band like us. We've been around so long, it's hard to accept criticism from somebody we've never worked with. But we did, and it was good. It was really good. We might be working on a track, and he'd go, 'Oh no, it doesn't feel right. Try it again and try extending that part.' So we'd do it and then we'd be thinking to ourselves that it may be too long, but we'd do it anyway. And then he'd go, 'That doesn't feel right. Let's try another one.' And then he'd say, 'Okay I think we've got it, but do you want to just try another one?' So we would try another one, and he'd say, 'Okay, let's leave it now.' So we never knew exactly which one he was going to pick."

Asked in a 2021 interview with SPIN if he had learned anything from working with Rubin, Iommi quipped: "Yeah, I learned how to lie on the couch with a mic in my hand and say 'Next!' ... It was just different, the way he works. He wanted to find the original SABBATH sound. He said, 'Have you got your original amps?' I said, 'Rick, that was 50 years ago. Do you have any amps from 50 years ago? … I don't have them, they've blown up. They're gone long ago. I've got my own amps now.' He said, 'No, we need the old stuff.'

"So, I get to the studio, and there are 20 different bloody amps there. He goes, 'They're vintage amps.' I said, 'That doesn't mean they sound good; they're just old.' He went, 'Well, let's try them.' I tried them, and I didn't like any of them.

"So it was a bit of a backwards and forwards till he got used to me, and I got used to him, really," Iommi added. "But we did it, and the album was very basic. I'd done a lot of the songs from the last album in my studio at home. I thought the sound was better, to be honest. But there was more stuff involved; I put more instruments on it. He just wanted it very bare and very basic, which you know, was good."

Original SABBATH drummer Bill Ward in May 2012 announced that he was declining to join his former bandmates for its scheduled dates, as well as the recording of the new album, due to a contractual dispute. After SABBATH shot down Rubin's suggestion to replace Ward with Ginger Baker (CREAM) ("I thought, 'Bloody hell?'" Iommi told Rolling Stone magazine. "I just couldn't see that."),Rick suggested RAGE AGAINST THE MACHINE drummer Brad Wilk.

A little over a decade ago, SLIPKNOT frontman Corey Taylor blasted Rubin after they worked together on the band's 2004 album, "Vol. 3 (The Subliminal Verses)", saying that "Rick Rubin showed up for 45 minutes a week. Rick Rubin would then, during that 45 minutes, lay on a couch, have a mic brought in next to his face so he wouldn't have to fucking move. I swear to God. And then he would be, like, 'Play it for me.' The engineer would play it. And he had shades on the whole time. Never mind the fact that there is no sun in the room it's all dark. You just look like an asshole at that point. And he would just stroke his huge beard and try and get as much food out of it as he could. And he would go, 'Play it again.' And then he'd be, like, 'Stop! Do that over.' And he had an assistant who was seven feet tall. He had that disease where you can't grow hair on your body, so he was just bald. He looked like Mr. Clean's neurotic cousin. But he basically ran Rick Rubin's life like, he was just fucking on it, on it, on it, on it. About half way through our precious 45 minutes, he would bring in this plate of shit. I assume it was food. It was bluish green. It smelled like someone had just plunged a fucking toilet somewhere. And he would eat it as fast as he could just get it in there, all over himself. Which is, when you're working, so wonderful to look at…"

Rubin has worked with numerous artists over the years, including AC/DC, RED HOT CHILI PEPPERS, Johnny Cash, SLAYER, METALLICA and many more.

Taylor told The Pulse Of Radio at the time that "Vol. 3: (The Subliminal Verses)" was released that working with Rubin took some getting used to. "It was definitely frustrating at first, because Rick is kind of renowned for taking his time and, you know, we definitely took our time on this one, with six and a half months," he said. He sat us down, he's like, 'Do you realize that you can be just as extreme with a whisper as you can with a scream? The heavy stuff, you're obviously very good at, but at the same time, we're gonna break outside of this box.'"

SLIPKNOT guitarist Jim Root told Revolver magazine in 2008: "Rick was really attentive to what we needed as a band.... A lot of the guys in the band say Rick was unavailable. And yeah, he takes on a lot of projects at one time, but he also does things that are beneficial. He would listen to what we'd done, then have us retrack things that needed work. He's kind of like Big Brother up on the hill. Even though he wasn't there physically every day, he was."

In that same interview, Taylor said: "I wouldn't know what it's like to work with Rick Rubin. I only saw him about four times. Rick Rubin is a nice man. He's done a lot of good for a lot of people. He didn't do anything for me... if you're going to produce something, you're fucking there. I don't care who you are."

Thank you @geezerbutler for coming by my Vegas place today and joining me on #TrunkNation ! If you missed it now on the @SIRIUSXM app. Replay tonight 10-Mid ET @siriusxmvolume 106. Geez at 11P ET. Just another day at work in Vegas… awesome!! pic.twitter.com/a8NuK6aXFh