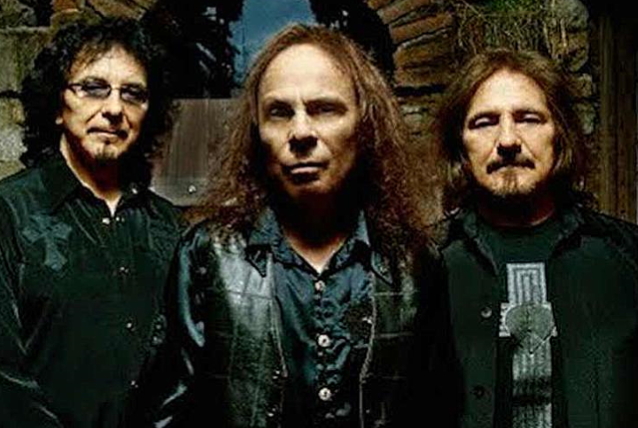 Earlier today, Tony tweeted: "Remembering our dear friend Ronnie. I can't believe it’s been 10 years since Ronnie passed away. He is so greatly missed but never forgotten and his music will live on in our hearts forever."

In a 2019 interview with Planet Rock, Iommi said that BLACK SABBATH's decision to part ways with the malfunctioning Ozzy Osbourne in 1979 and replace him with Ronnie James Dio gave the band a much-needed boost of energy.

"When we replaced Ozzy with Dio, it really did start us off again," he said. "We had somebody that's come in that's had some input. And he would sing to the riffs we'd got. 'Cause it's a bit disappointing when you come up with all these riffs and nothing is done with them. And you start thinking, 'What are we gonna do?' So when Ronnie came in and I played him a couple of riffs, immediately he started singing 'em. We were all living in the same house in Bel Air. In the garage, we turned it into a studio — we built a studio there. So we'd go in there and play. When Ronnie came up, we played it live, and it was great — he just sang away and it was brilliant. And it was a totally different approach."

He continued: "As soon as Ronnie got involved, the writing changed as well, because I was able to play a different way, for some reason. Whereas Ozzy would sing a lot on the riffs and follow the riff, Ronnie would sing in between stuff — he didn't always sing on riffs, and he'd sing on chords. And we were trying to also talk to him about singing on the riff as well, which he did on a couple of the things. But more or less, it was good, because you could approach the songs differently. And here you are with a singer that you don't know where he's gonna go. And it's quite exciting, because you can play something and you can hear him go into a place that you wouldn't ordinarily recognize… Later on, he started suggesting ideas. Not so much right in the beginning, because he was obviously new and he didn't wanna upset the boat. I think 'Children Of The Sea' was the first one he sang. And we had that riff for a bit, and he just sort of sang it. And it was really good — the first things he did."

Nearly 10 years ago, Butler told Noisecreep that Dio's health problems became much more serious after the completion of the first leg of HEAVEN & HELL's summer 2009 tour. "He started really going downhill in September, towards the end of the U.S. part of the tour," he said. "The U.S. tour was supposed to have two parts. We did the first four weeks, then Tony had something happen to his hand and he had to have an operation immediately. So we had to postpone the second part of the tour so Tony could have his hand looked at. And Ronnie's stomach problems got worse and worse. He was going to do a DIO tour in Europe and he was rehearsing for that, but his stomach kept getting worse. Then he went to the doctor and the doctor didn't say anything about it at first. He just gave him some constipation medicine and said he was severely constipated. And then he went to a specialist and they told him it was stomach cancer."

Asked if Ronnie had been exhibiting signs of stomach cancer, Geezer said: "He'd been having stomach aches, but everyone gets flu or food poisoning when you're on tour. You're in front of 10,000 people, and 2,000 might have the flu. There are all these germs around, so you always get something when you're on tour. And Ronnie was getting these stomach pains. One night he'd be all right and the next night he'd be doubled up in pain. The last week of the American tour, he was in agony. I'll always remember he came out for the very last gig and we said, 'Look, Ronnie, if you're that ill, we'll just blow the gig.' And he said, 'No, I'm not gonna blow the gig.' And he was literally doubled up in pain. And he just made himself go on. He totally refused to cancel the show. So he went on and we thought, 'Oh, God, what's gonna happen?' None of us ever thought cancer; we just thought it was a severe stomach bug. And then [in late 2009], just after Halloween, he went in and got the report it was cancer. It was just one of those things you don't expect to happen."

Remembering our dear friend Ronnie. I can’t believe it’s been 10 years since Ronnie passed away. He is so greatly missed but never forgotten and his music will live on in our hearts forever.