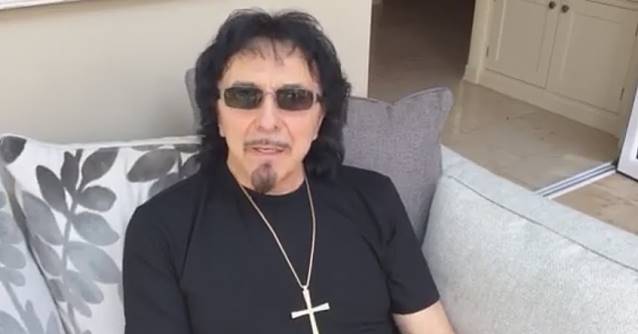 BLACK SABBATH's TONY IOMMI Thanks Fans For Their Support: 'We'll See You On The Next Tour'

Legendary BLACK SABBATH guitarist Tony Iommi has released a video message thanking fans for their support and hinting that the band will do more touring in the future.

Iommi, who has battled cancer since 2012, said recently that BLACK SABBATH's massive July 4 gig at London's Hyde Park could be the band's last because the touring can be tough on him. But in the latest video message, Iommi sounded more optimistic about the prospect of returning to the road, telling fans, "We'll see you on the next tour."

Said Iommi: "Hello everybody. I wanna thank you for all your messages on Facebook. It's been great. We've had a laugh, and some of them have been really great and very supportive. Thanks so much. I am at home at the moment, about to leave for Hyde Park, which we'll play [on Friday, July 4], and I'm really looking forward to that. The tour has been marvelous; we've had a great year, and you couldn't wish for better. It's been phenomenal ,and you've been phenomenal. And thanks for coming to the shows and being supportive. Thank you very much and we'll see you on the next tour. Thank you very much. Bye."

BLACK SABBATH singer Ozzy Osbourne and bassist Geezer Butler recently seemed to have slightly different takes on whether the reunited band will record a follow-up to "13". Asked about Iommi's remark that the concert in Hyde Park could be their last, Ozzy told Guitar World, "If it's goodbye, we're ending it on a high note… But I'm up for another BLACK SABBATH album and tour. If we can, great. If not, I'll just carry on doing my own thing."

The Hyde Park show will feature SOUNDGARDEN and others in addition to the headliners.