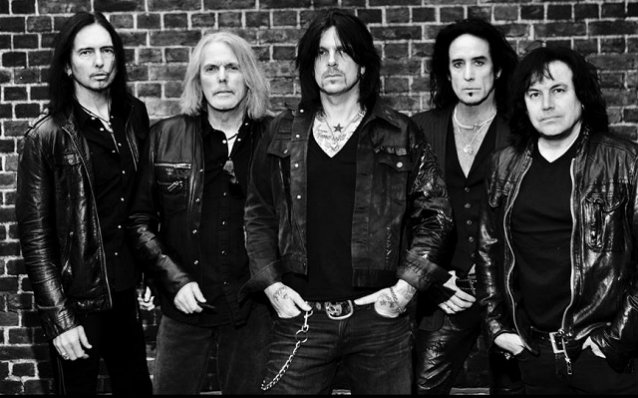 Comments Warwick: "Joe Elliott's passion, enthusiasm for music, as a fan, artist and friend is unquestionable and Ronan McHugh is a phenomenal engineer.

"Personally, having worked with these guys before, it was a no-brainer when they said they would like to produce the new BLACK STAR RIDERS album.

'We are confident that this will be a huge leap forward in the evolution of BLACK STAR RIDERS."

Adds Elliott: "Having worked with Scott on the THIN LIZZY remixes a few years ago and having produced Ricky's first two solo albums, I'm looking forward to taking our musical journey together even further.

"We're aiming to make a serious leap forward with the next album and I'm proud to be able to contribute to the next chapter in the BLACK STAR RIDERS story."

States Johnson: "We are all excited about working with Joe; he is like part of the family. And recording this album in Ireland is a special treat for us."

BLACK STAR RIDERS made its live debut on May 30, 2013 at The Marshall Theatre in Milton Keynes, United Kingdom. The set featured a mix of music from "All Hell Breaks Loose" along with classic THIN LIZZY tracks.