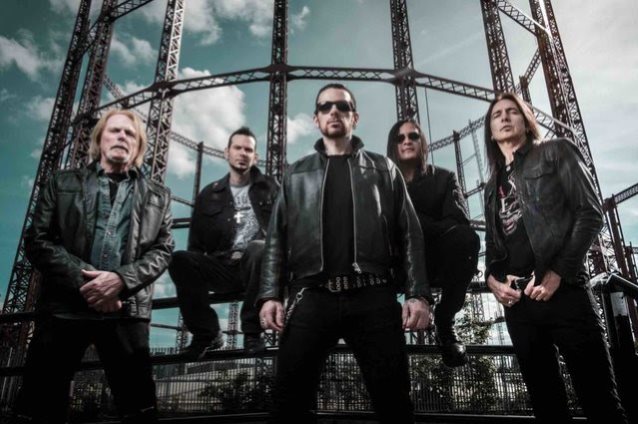 BLACK STAR RIDERS guitarist Scott Gorham has confirmed to Planet Rock that the band is planning to enter the studio early next year to begin recording its follow-up to 2017's "Heavy Fire" album. "I've got a few riffs that are coming out," he said at this past weekend's Steelhouse Festival in Wales (see video below). "I've already showed them to the guys, and everybody is jumping all over them. We're due to start recording our fourth album in February. So we're already… I think Ricky [Warwick, vocals/guitar], lyrically, has probably got three-quarters of the album already written. It's just now down to us collaborating [on] the chord sequences and the riffs and whatever, if we're gonna put harmony bits in there and all that. So we're a pretty well-oiled machine on that side."

The 67-year-old rocker, who joined Phil Lynott's THIN LIZZY in 1974, also talked about the decision to form BLACK STAR RIDERS in 2012 and not continue with the THIN LIZZY name out of respect for Phil, who died in 1986.

"I still think that was absolutely the right way to go, the right thing to do," Scott said. "And yes, we were, at one point, thinking about doing another THIN LIZZY album, but, as time rolled on, I just personally became more and more uncomfortable with that whole way of thinking. Especially because it's my buddy Phil, man — he was the guy that introduced me to all of this stuff. And I'm gonna go out and take the name and record another album without him standing in the middle? I just got too uncomfortable with that, and I had to voice that opinion to everybody else who was involved with it at the time. And, to be quite honest, I think everybody was actually relieved, because they didn't want to have to compete with other THIN LIZZY albums. And we knew that probably some of the fans were not gonna like it, so I didn't wanna alienate anybody."

Last year, BLACK STAR RIDERS inked a new worldwide deal with Nuclear Blast Entertainment, the label that has released all three of the band's albums so far: 2013's "All Hell Breaks Loose", 2015's "The Killer Instinct" and "Heavy Fire".