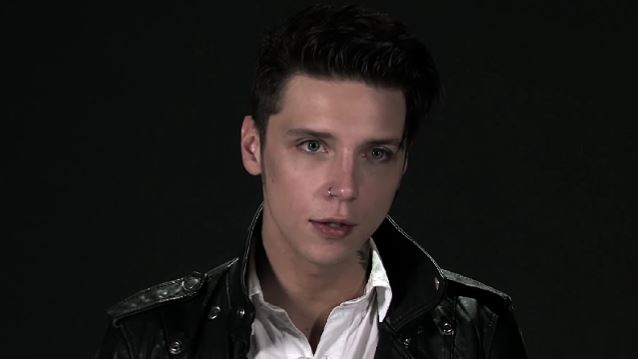 BLACK VEIL BRIDES frontman Andy Biersack says that he has not time for other musicians who have publicly disparaged his band, explaining that "it's irresponsible" to create "unnecessary division" between fans at a time when rock acts are struggling to stay relevant in a saturated pop landscape.

Back in May 2013, FIVE FINGER DEATH PUNCH frontman Ivan Moodycalled outBLACK VEIL BRIDES in a couple of posts at his Facebook page, commenting on a YouTube video of BLACK VEIL BRIDES by remarking, "I'll say it...YUCK!...Time for people to be 'REAL.' This sux."

Asked if he ever feels like he's right back in high school, or right back being a 16-year-old kid trying to defend himself from bullies when he sees people like Moody attacking him, Biersack told "The Louvau Show" (hear audio below): "No, I feel like they're in high school. I graduated. My thing is very simply… I left high school. I literally did not graduate. I left high school very early. I was 17. So I guess it wasn't that early, but I did not get a high school education. All I ever wanted to do was be in a band. I moved to Los Angeles, I lived in my car. I was homeless for close to a year. And then after that, I lived on people's empty's couches or with girls or wherever I could [go].

"I don't really have any interest in allowing other people's, kind of, idiotic, unnecessary, either bigotry or hatred or whatever derision they have for me, I don't allow for it to really bother me, because I don't need it.

"To me, when I look at somebody saying something negative about the band, I just think it's a shame, because… especially for someone who's in another band who's in a position of power, I think it's irresponsible. Even if you don't like what I do, and you don't like my band, you might have a fan that likes both of us, and why would you wanna alienate them? There are many bands that I don't like, or I don't appreciate people in those bands as people or whatever else, but I don't go on and on about it. And I'll never be the guy who calls out people in bands or whatever else, because I feel like, if rock is still antiquated and marginalized anymore, it's almost like we're all trying to sell a rotary telephone or black-and-white television to people — you know what I mean? — in terms of the public conscious. Why in the world would we wanna ruin the thing that is so wonderful to so few people who have such interest in it? Why would we wanna ruin that by creating unnecessary division within the context of being a fan? I don't want some kids that love my band and another band to think they can't like both those bands."

"And the good thing is that most of the stuff has fallen by the wayside as the years go on. We've been around long enough now that a lot of that kind of controversy or polarization or whatever, it [tends to go] away. More often than not now, when we go do a festival, or we're out with other bands, people are more often than not excited to see us or say something positive to us. And we've had a great experience. I think that sometimes little people with big mouths get a little bit blown out of proportion. The reality is that I'm not up against it every day. I don't walk out of my hotel room and a bunch of people are coming after me to yell at me about how much they hate me. I have a very positive life. I'm in a successful rock band, and people come see my shows every night, and I've been able to meet almost all of my heroes, and all of them have said really positive things about me. When people like Alice Cooper and Nikki Sixx and Sebastian Bach and Dee Snider and all these people come out so vocally behind my band and said such wonderful things, I don't really have time for [negative comments from] bands that I don't care about."

BLACK VEIL BRIDES' self-titled fourth studio effort (also known as "IV"),arrived on October 28. The follow-up to last year's "Wretched And Divine: The Story Of The Wild Ones" was helmed by producer Bob Rock, whose resume includes albums by METALLICA, MÖTLEY CRÜE, THE CULT and many others. The 11-track album features some of BLACK VEIL BRIDES' most aggressive and diverse songs to date.