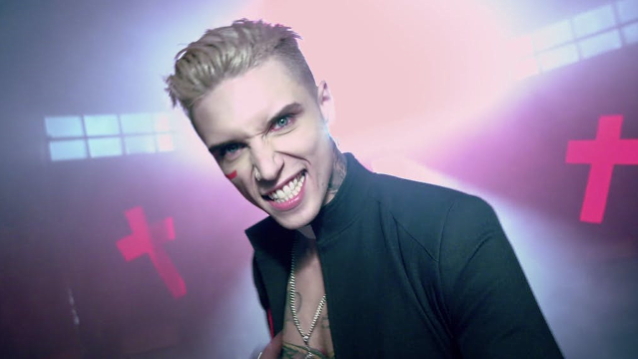 In a recent interview with Anne Erickson of Audio Ink Radio, BLACK VEIL BRIDES singer Andy Biersack was asked for his thoughts on the passing of Eddie Van Halen. He responded (hear audio below): "You know, it's one of those things where it's actually kind of funny — I wasn't a VAN HALEN fan as a kid, and not for lack of trying. My dad, who introduced me to KISS and all the other bands that I ended up listening to, was always trying to get me to like VAN HALEN. But there was just something about [David Lee Roth] that just didn't connect with me. And as an adult, I kind of found it later and grew to really love and appreciate what they are as a band and how important they were.

"Obviously, there's a lot of things that play into KISS where Eddie played on 'Christine Sixteen' and a number of other songs, and obviously, [VAN HALEN] was originally discovered by Gene Simmons, and he tried to sign them, and they were basically turned away by the original management company, saying that this band wasn't gonna succeed," he continued. "And I've also resonated heavily, personally, with kind of their story in the sense that — not to take it away from Eddie too much, but when it comes to David Lee Roth, he's someone that when he first started, people said he couldn't sing, and he had a very different kind of voice, and they said he wasn't going anywhere. And when we first started, that was the same sort of critiques that we were getting — that we had amazing guitar players but the singer can't sing. That was one of the things that we heard all the time. So, I can really relate to their story in that way.

"I'm in my living room right now, and [my wife] Juliet [Simms] and I have these pictures all around our living room of the cream-of-the-crop rock stars. And we've got all these framed photos of their mug shots. We always just thought it was interesting because — to get to see these stars that we grew up with and see that they also did things that were crazy. 'Cause sometimes anybody, you feel, man, did I make the right decision? Or, maybe that song was terrible, and is this going to ruin everything? And we kind of liked the idea — we have all these art pieces in our living room of [David] Bowie and Mick Jagger and Jimi Hendrix, and all the kind of main stars. And as I look around this room, so many of them have now passed, and it's truly a bizarre feeling to think of these incredible mammoths of rock.

"I always think when rock stars roamed the earth, all these pillars of the culture that I grew up in and idolizing, the fact that so many of them are gone is just heartbreaking," Andy added. "And I don't think you can ever possibly even speak to the level of importance that Eddie Van Halen had without even underselling it, because he kind of singularly created the idea of a guitar hero and that style of guitar playing and created a style that had never been heard and then was immediately replicated or tried to be replicated by everybody under the sun after that. And that is extremely unique and extremely important. And it was a huge loss for the rock community, and a huge loss for the world."