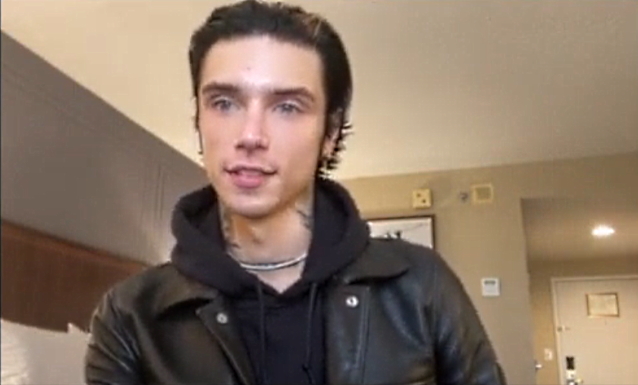 In a new interview with Rock Titan TV, BLACK VEIL BRIDES singer Andy Biersack spoke about what it's been like for him and his bandmates to return to playing live shows during the pandemic. He said (as transcribed by BLABBERMOUTH.NET): "The weird stuff, the new restrictions and all that stuff, it maybe took a day or two before you just go, 'Okay, this is what it is.' And then you're just on tour. And all the restrictions and the constant testing and all that stuff just becomes part of your day on tour. So for me, you kind of block out the part that remembers life before touring was like this, and to me, this is just what touring is. Anything you've gotta do to be able to get out there and see the fans and to sing with people, it just is everything. We all did our best with the livestreams and doing all that stuff during the pandemic, but there's no replacing a live rock and roll show. It's a unique experience that needs to happen as its own entity."

As previously reported, BLACK VEIL BRIDES will team up with MOTIONLESS IN WHITE and ICE NINE KILLS for a triple co-headline North American tour next spring. The "Trinity Of Terror" tour will be the first time ever that fans get to see all three bands on the same stage each night.

The coast-to-coast outing, which will see the three bands alternating closing sets each night, is set to kick off on March 17 in Mesa, Arizona and make stops in Los Angeles, Chicago, Salt Lake City, Philadelphia, and more, before wrapping up with a performance at Norfolk's Chartway Arena on April 27.