Los Angeles rockers BLACK VEIL BRIDES have announced their next virtual concert. "Alive And Burning 2" — a global streaming event — will air on December 11 and start at 7 p.m. across four time zones (PST / EST / UK / AUS). The local 7 p/.m. streaming time was created so global fans can experience the energy of BLACK VEIL BRIDES at a reasonable start time from the best seat in the house. The show will feature a collection of fan-favorite greatest hits as well as the debut live performance of the band's new single, "Scarlet Cross". Tickets for "Alive And Burning 2" are now available in various bundle configurations can be purchased at www.BlackVeilBrides.LIVE.

"We are so excited to share 'Alive and Burning 2' with the world," says BLACK VEIL BRIDES singer Andy Biersack. "This show is a collection of some of our favorite songs spanning our entire career as well as the live debut of 'Scarlet Cross'. We feel confident that while the pandemic continues to prevent in person live concerts, this show will be a fun experience for any BVB fan. We set out to make a more cinematic streaming show and give the BVB Army something special. We can't wait to unveil it on December 11th."

Last month, BLACK VEIL BRIDES released the video for "Scarlet Cross". The song comes from their upcoming 2021 concept album "The Phantom Tomorrow" — the band's sixth full-length effort. The LP tells the story of the antihero character "The Blackbird" and a group of societal outcasts known as simply as "The Phantom Tomorrow". "Scarlet Cross" — produced by Erik Ron (GODSMACK, DANCE GAVIN DANCE, BUSH) and guitarist Jake Pitts — is available via all digital partners.

The video for "Scarlet Cross" was directed by longtime collaborator Patrick Fogarty and based on a concept written by Biersack. The video was filmed on the Santa Clarita Studios backlot and is the first in a series of videos that will follow the story of the main character "The Blackbird". The video opens as a female member of "The Phantom Tomorrow" takes to the streets only to be discovered and followed. As things get dire, the "The Blackbird" arrives only to fade to black. Shot to look like an old school comic book serial, the video ends with the cliffhanger tease leaving the viewer unsure of the fate of the heroine or her attackers.

BLACK VEIL BRIDES are hard at work putting the finishing touches on "The Phantom Tomorrow", scheduled for release next year via Sumerian Records. 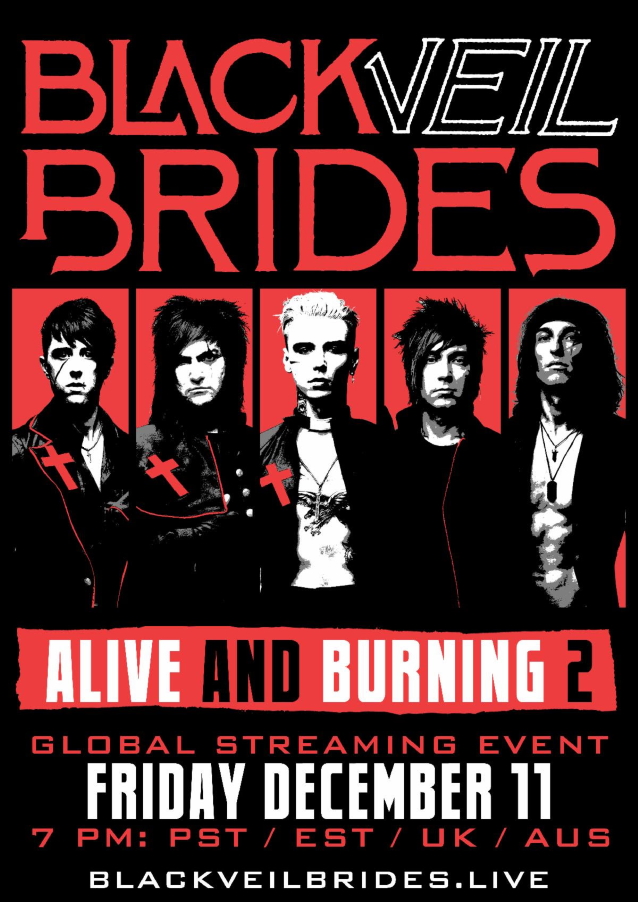