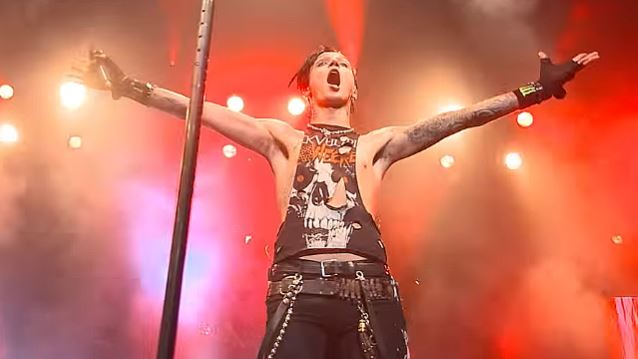 BLACK VEIL BRIDES have entered the studio to begin pre-production on their fifth album. The band is once again working with with GOLDFINGER frontman and producer extraordinaire John Feldmann, who helmed BLACK VEIL BRIDES' 2013 effort "Wretched And Divine: The Story Of The Wild Ones".

A few photos of BLACK VEIL BRIDES in the studio with Feldmann working on the follow-up to the band's 2014 self-titled album can be seen below.

BLACK VEIL BRIDES vocalist Andy Biersack recently told Jägermeister UK about the group's songwriting process: "Everybody writes in their own way, I think, everywhere we are, whether it's guitar players having a riff, or one of us having an idea here and there. But I think we generally write when we're together, or when we're in a position of being in a studio situation. Our one guitar player, Jake [Pitts], has a home studio. So does [the other guitarist] Jinxx [Jeremy Ferguson]. It's about writing riffs, coming up with ideas — melodies, lyrics, those kinds of things — and then when we're together, compiling them that way. We're not a band that's sitting in a dressing room, smacking our knees and humming along and singing a song that way."

Biersack also expressed a desire to not set any deadlines while writing and recording the follow-up to "Black Veil Brides". He said: "I think at this point, we've never had an opportunity, in all of our career, to make a record that had some time behind it. Every record that we've done has been a really quick turnaround, and that's not by design — that's because, times being what they are, the record label goes, 'Have us a record now.' And we go, 'We wanna do this crazy concept record.' And they go, 'Well, you have two months to do it. So good luck with that.' Now, we've kind of… By virtue of the fans, we've got an opportunity to take a little bit of time. I don't think we'll be the band that you'll see years go by without a record, but I don't think that you're gonna see another BLACK VEIL BRIDES record in four months. The goal is by the beginning of [2016] to be working on something new, and then to perfect it. And we'll release it when we think it's ready."

BLACK VEIL BRIDES released its first-ever concert DVD and Blu-ray, "Alive And Burning", on July 10. The cover artwork for the set was designed by the band's longtime friend and previous album cover illustrator Richard Villa.

Excited for another day of pre production with @johnfeldy for the new @blackveilbrides record and some new toys from @schecterguitarsofficial !!!