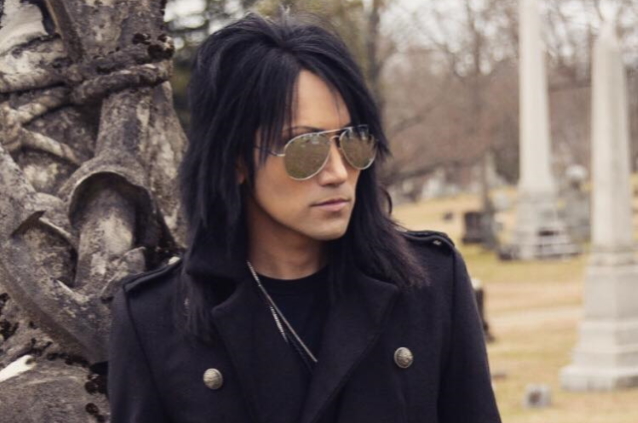 BLACK VEIL BRIDES' longtime bassist Ashley Purdy spoke to Sonic Perspectives about his surprise departure from the band last November. His exit from the group took place not long after he spent time in a psychiatric hospital to undergo intensive grief counseling and therapy from a few recent deaths and tragedies.

"What sucks was the timing of it all," Ashley said. "They didn't have anything to do with each other. There are legal aspects of what I can say about the departure.

"Fans of the band are continually coming up to me, asking why did I leave the band. Technically, I didn't leave; I'm just not in the band anymore. I have to talk in those terms right now.

"BLACK VEIL BRIDES is a corporate business, and there are legal rules," he explained. "It's like a divorce, and we are working it all out.

Purdy also offered an update on his emotional and physical well-being, saying: "It just had to take its course, but at least I was strong enough to know I needed to seek help. I was trying to be a tough guy and deal with it on my own until one day I broke. I went to a physician to get some meds after telling him my story, and he was, like, 'No, you need more treatment.' I was admitted to a psychiatric hospital for a week to get medicine, therapy, and grief counseling. At the group sessions, I heard other people's stories and knew I wasn't alone. The oddest thing was a psychic medium who I didn't know, reached out to me through a friend of a friend to give me a message from the people who passed into the afterlife. What the medium told me was very believable, as nobody would have known the level of details they shared. Strangely, hearing that they were okay helped me. This whole thing changed my perspective and I'm living a different way. I'm an open book now. There is nothing I won't say or do or help someone. It's part of life, and I'm accepting of it."

Purdy recently released a new solo song called "Nowhere". Another single will be made available in the coming weeks.