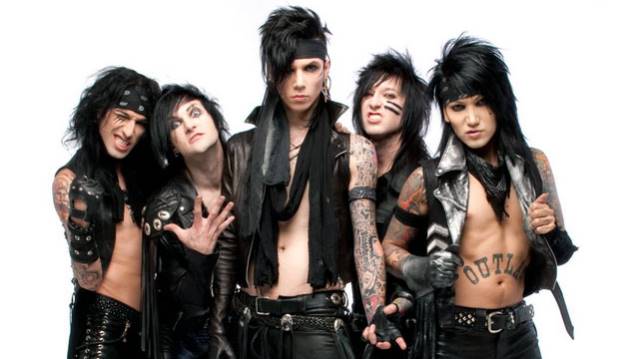 "Heart Of Fire", the new single from Los Angeles theatrical rockers BLACK VEIL BRIDES, was premiered on tonight's (Monday, September 8) edition of BBC Radio 1's "Rock Show" with Daniel P. Carter. The song is described in a press release as "an upbeat rocker that showcases the band's signature dual-guitar attack and driving rhythm section all behind a positive lyrical message the band has become known for."

To listen to "Heart Of Fire", go to BBC.co.uk and skip to the 33-minute mark in this week's "Rock Show" episode.

"Heart Of Fire" is taken from BLACK VEIL BRIDES' new self-titled album, also known as "IV", which will be released on October 28. The follow-up to the group's third CD, last year's "Wretched And Divine: The Story Of The Wild Ones", was helmed by producer Bob Rock, whose resume includes albums by METALLICA, MÖTLEY CRÜE, THE CULT and many others. The 11-track album features some of BLACK VEIL BRIDES' most aggressive and diverse songs to date.

The album cover was designed by longtime friend and previous album cover illustrator Richard Villa and can be seen below.

Video footage from the "IV" listening party, which was held on September 2 in New York City, can be seen below.

Asked how BLACK VEIL BRIDES approached the writing process for the new CD, BLACK VEIL BRIDES singer Andy Biersack told U.K.'s Rock Sound: "One of the most interesting things about working with Bob Rock this time was that he requires weeks and weeks of pre-production, just writing and jamming together.

"I knew that the guys in my band are very talented musicians, but we've never taken the time to sit in a room facing each other, and continuously write for weeks on end — there was just a small mic in the middle of the room, and Bob would orchestrate us. If something came up that we liked, we'd try to cut a demo of it just from that. The idea is that if you write all together, you'll find great material, and know it from the ground up.

"When you're doing stuff the way we were previously, it's very difficult to go back and adjust, because the elements are all built simultaneously. This has given us a chance to do something organic, to know the songs a lot better. So heading into the studio, with twelve or fifteen songs that we feel strongly about, is a new experience. Through writing in advance, I feel like we've found our definitive sound. It's a lot more heavy, traditional rock 'n' roll than anything we've done before."

Regarding whether that was the band's aim from the start, Beirsack said: "More than anything, even before we found out that Bob was interested in doing it, we wanted to make a return to the darker, heavier material — in tone at least. We touched on that with the first record, but weren't as mature songwriters back then; I don't think we've ever truly executed the sound we've wanted to have as a band.

"We've always evolved, and I've always been excited about everything we've done, but this was something all of us have wanted to do.

"If we'd have been as good songwriters five years ago, the record we would have made then would have sounded a lot like this new one. That was an exciting notion, going back to the things we talked about when starting the band together. It's a return to the things we really love. Bob was a great fit for that. So many of the records that influenced us or that we loved growing up were produced by him. It was something we'd been talking about for the last year, and when we found out Bob was interested, it was a nice coincidence."

"There's no way this record won't be fantastic to me. I feel like through doing this, I've learned so much about what it is what we do, what we've been trying to do for the last half-decade. It helped that Bob is one of the sweetest, easiest to work with, most insightful people I've ever met. When you talk about nice people: he's a Canadian who lives in Hawaii. [laughs] I can't imagine anyone with a nicer disposition, let alone someone so talented."

"Wretched And Divine: The Story Of The Wild Ones" came out in January 2013 and featured the Top 15 rock radio single "In The End".