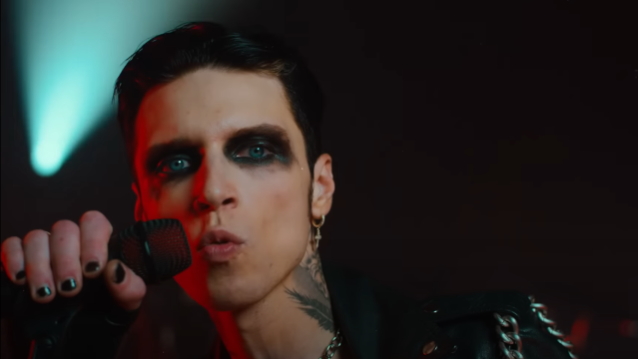 Los Angeles rockers BLACK VEIL BRIDES have released the official music video for their song "Born Again". The clip, which was directed by Vicente Cordero of Industrialism Films, can be seen below.

BLACK VEIL BRIDES singer Andy Biersack told Rock Sound about "Born Again": "'Born Again' was a song that was written later in the process. We felt like we needed to have a song that represented the joy and the idea of rebirth with these characters in 'The Phantom Tomorrow' finding what they thought might be their savior in Blackbird. Through the story you find that there have been sightings of this character, there's this old legend of the idea of the Blackbird, this thing that's passed from generation to generation, and now this is 'The Phantom Tomorrow' and the people in the underground saying, 'This is our chance. We're gonna be born again,' singing in the streets. 'This is our opportunity to get out of the shit that we're dealing with with the Ninth Circle and all of the rules and the stipulations and the things that they have to go through. So this is meant to be kind of a joyous moment on the record before ultimately you discover this Blackbird character."

Biersack previously discussed the lyrical themes covered on "The Phantom Tomorrow" in a 2021 interview with "Cutter's Rockcast". He said: "It's a concept record. The story is essentially the idea… In our society, especially now, we have this love of building up heroes and obsessing over other people who often don't give a shit about you or anybody else, and we kind of have these false idols and heroes. And so the story is kind of about taking this mythological character and the people putting all of this power on to them, and then ultimately turning their back on the character because nobody can fulfill the dreams and ideas that you put on somebody else. So it's an alternate version of our own timeline where our obsession with heroes and the iconography of somebody that's aspirational kind of gets out of control and becomes our whole society."

Regarding how he came up with "The Phantom Tomorrow" concept, Andy said: "In January of [2020], I just kind of sat down and started writing this story. I do a lot of drawing when I'm writing as well. I'm not great, but I like to be able to represent my ideas in that way. So I wrote out this whole story and drew character designs, and then, about a week and a half later, we were set to enter the studio, and it just kind of coincidental that this whole rush of this idea came to me. And so I went to the studio with everybody and said, 'Look, this is what I think we should do,' and laid out the story and the plot and the ideas. 'Cause we've done concept records before. The kind of method that we've found is best is I give the concept and the ideas, as far as the narrative perspective, to the band, and then that is how we write as a band together, to get tone and how we are gonna get through this journey. I will take those songs and then go basically write the lyrics to serve the story and plotlines along the journey from song one to the last song.

"There are unfortunate kind of shackles that are put on it — meaning that you've gotta write within the context of what you're writing," he continued. "But I tried to keep this one more open-ended where it's applicable… 'Cause I didn't wanna write about stuff I don't know; I wanted it to be about my experience. And there's really nothing about our story that doesn't mimic the current situation, whether it's on a personal level with people that I've known, or on a sociopolitical level, with the craziness of the world right now. The ideas are universal, and so that made it a little bit easier to kind of get through the journey."