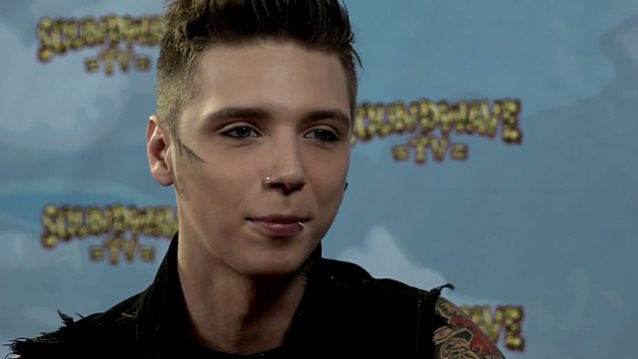 BLACK VEIL BRIDES frontman Andy Biersack has launched a side project called ANDY BLACK, which he described as a "fun and artistic way for me to try something that musically I wouldn't want to force into BLACK VEIL BRIDES." In an interview with Kerrang! magazine, Biersack explained how the "dark wave" project came into being, saying, "My whole life, I've loved '80s synth and goth rock like THE SISTERS OF MERCY and DEPECHE MODE. My biggest love has always been the music BLACK VEIL BRIDES make, but that doesn't mean I don't listen to or enjoy other things."

Biersack added, "The older I get, the more interest I have in writing other kinds of music… The idea of doing it as a side project didn't really interest me until I got about nine songs in and realized I had some great stuff."

Asked why he couldn't incorporate his songs into BLACK VEIL BRIDES, Biersack replied, "There are so many bands I loved growing up whose singer would have a new idea for a sound and then completely ruin the band by taking a shit on the whole audience. That wasn't my interest."

Biersack continued, "It would be different if the reason I was doing this was that I wanted to get away from BLACK VEIL BRIDES . . . this is more that I didn't want to cross the two things."

Biersack told The Pulse Of Radio the relationships within BLACK VEIL BRIDES are as solid as they can be.

"We've been together for a while and it's sort of like any other band that's been touring for a while together, you develop sort of a gang mentality," he said. "And obviously like group of grown men who are sort of brothers, we have our little fights and we bicker, but for the most part, you know, I think we always go into everything as 'This might be hard to do, but we're going to do this together,' and we try to enjoy our experiences together."

The singer said that when he informed his bandmates about the project, "I made it very clear… it was a passion project on the side, and everybody in the band gets it."

Biersack has not made plans to record an ANDY BLACK album yet, but has filmed a music video.

BLACK VEIL BRIDES is currently in the midst of recording its fourth album, which will follow up last year's "Wretched And Divine: The Story Of The Wild Ones".

"Wretched And Divine" came out in January 2013 and featured the Top 15 rock radio single "In The End".