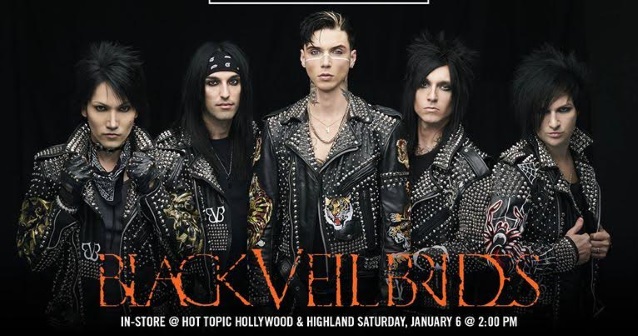 BLACK VEIL BRIDES will debut their 2018 tour merchandise collection with an in-store appearance at Hot Topic today (Saturday, January 6) at in Hollywood, California.

One week before the release of the band's new album, "Vale", and the launch of the group's co-headlining "The Resurrection Tour" with ASKING ALEXANDRIA, BLACK VEIL BRIDES will preview the disc for fans in attendance.

"Vale" will be released on January 12 via Lava/Universal Republic. The follow-up to BLACK VEIL BRIDES' 2014 self-titled effort was produced by John Feldmann at his Southern California studio.

BLACK VEIL BRIDES frontman Andy Biersack told the Rock Sound Podcast about the musical direction of the band's new album: "The previous record that we made with [producer] Bob Rock was a much more straight-ahead, hard rock, heavy metal record. I think that this album — and everybody says this, of course, because you want it to be true — but at least for me, I believe that it's a nice combination of many different eras of the band. I think that it represents all the different places that we've been while retaining that Feldmann thing, that thing about Feldy that I don't think anybody else can even touch or come close to; he just knows how to make things huge."