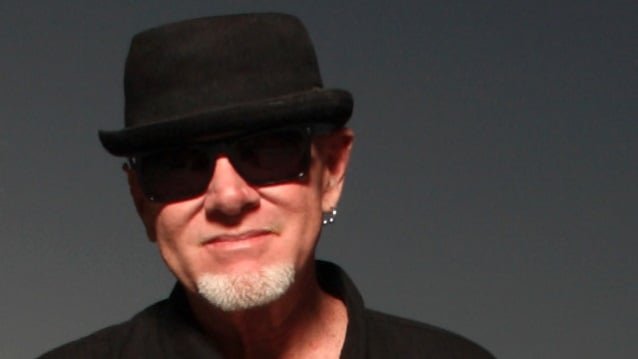 Guitarist Mark Kendall says GREAT WHITE allows former singer Jack Russell to use the band's name so he can "earn a living", adding fans would have to be "a bit dense" to confuse the two acts.

Kendall tells the "White Line Fever"podcast he does not think GREAT WHITE is hurt by its moniker being used elsewhere.

"We police the mark because we own the GREAT WHITE name, but we wanted to compromise with Jack and give him a way to make a living," said Kendall. "And the only way we could think of was to let him call it JACK RUSSELL'S GREAT WHITE and have his name prominent.

"We haven't really run into too many problems. Sometimes, occasionally, a promoter will just call it GREAT WHITE and we're not playing and we'll have to send them the big court papers and everything. That can be a nightmare but it doesn't happen often, especially now.

"I think he's gone in a different direction with his music so musically there's no confusion, really.

"His name is pretty prominent so I think, unless somebody is just a little bit dense, they would not… I mean, if you see JACK RUSSELL'S GREAT WHITE and Jack Russell is really big on a record, I think you could figure it out that he has assembled a band around him. The ones that can't figure it out, I don't know what to say about that."

"He plays a lot of clubs," Kendall said. "We really don't play clubs. The reason he plays M3 [festival in Maryland] is because his manager runs that concert. That's the only reason we're not playing on that bill, that his manager is partner with the guy and they're the promoters for that concert every year.

"It's all good. The fans are the fans. They're gonna do what they're gonna do. We write the same way we always do, we changed singers, I don't know what to say about it. That's all I can tell ya."

Russell sued his onetime bandmates six years ago over their continued use of the GREAT WHITE name after the singer had taken a leave of absence from the band for medical reasons. A short time later, Russell was countersued by Mark Kendall, Michael Lardie and Audie Desbrow, claiming the singer's self-destructive behavior was damaging the GREAT WHITE name (they also alleged he was charging promoters less for his own touring version of GREAT WHITE). The parties settled in July 2013 without going to trial.

In his original lawsuit, Russell claimed that his former bandmates kicked him out of GREAT WHITE and stole the group's name while he was recovering from surgery to repair a perforated bowel.

Kendall, Desbrow and Lardie filed a 30-page counterclaim in April 2012 in a federal court in Los Angeles accusing their former frontman of, among other things, "miss[ing] 80 performances in 18 months" before leaving the band; "irreparably damag[ing]" their "market reputation" by putting on performances that "are not up to the standard of GREAT WHITE; and misleading the public by stating that the musicians in Jack's new band "were once full members of GREAT WHITE." They also accused Russell's new bandmates of "profit[ing] from their wrongful affiliation with the GREAT WHITE brand."