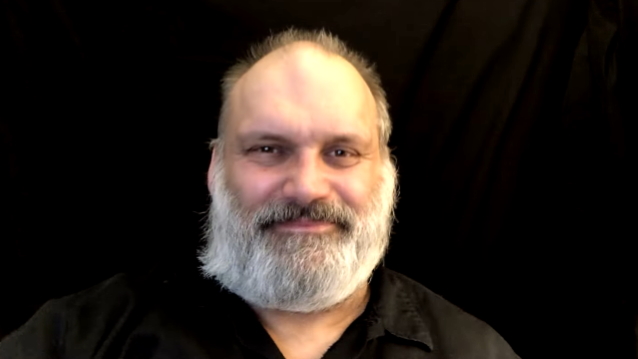 BLAZE BAYLEY Doesn't Care About Being Hated By Some IRON MAIDEN Fans: 'I Hope They Still Hate Me'

In a new interview with Aftershocks TV, former IRON MAIDEN singer Blaze Bayley was asked if it bothers him that some people stopped following his career once he was out of the band and they didn't have any interest in checking out his solo output in the decades that followed. He responded (as transcribed by BLABBERMOUTH.NET): "Well, not really, because I don't wanna be big. I'm not trying to be big. I'm not trying to play stadiums. I'm not thinking, 'I've gotta get back into big theaters. I've gotta get into arenas.' I've done it — I've done all of that. And now, I don't want too many fans. Maybe I'll get a few more fans with [my new album] 'War Within Me'. I don't want a lot more fans. I don't wanna be really popular. I'm happy where I am, doing what I'm doing. And if people wanna say, 'Well, the worst albums IRON MAIDEN ever made are with Blaze Bayley,' that's a good thing for me 'cause it will put people off and stop them buying 'War Within Me' and listening and getting into it, and then I'll have too many fans.

"I have to sign 1,500 CDs to ship out for my pre-orders on ['War Within Me']. My arm is aching, man. If I get a lot more fans, I may have to start working it out to do my signature left-handed.

"But it's just not important — it's not important at all," he continued. "Of course, within every performer and artist, there is a lust for recognition. I've had that recognition for years, and I have wonderful, loyal fans that support me. Really, my motivation is to do work worthy of the support I have. My fans will get the album, and I just want them to genuinely feel, 'Yeah, exactly what I expected — a great record.' Even if I have to work my heart out, I have to work my guts out, I'm where I want to be.

"The people that hated Blaze Bayley for being in IRON MAIDEN, I hope they still hate me," the singer added. "Because then at least I'm something. If [people] say, 'Who's Blaze Bayley?' 'He's the worst thing to ever happen to IRON MAIDEN,' then I'm okay with that. Because I'm still friends with the guys in the band. I still talk to Steve [Harris, MAIDEN bassist], have the odd call to the management, check everything's okay and all of that. So I really don't care what people think. Why should I? The only opinion that really matters to me is the people that supported me for so many years and make it possible for me to live my dream."

The 57-year-old Bayley, who was born in Birmingham, recorded two studio albums with IRON MAIDEN — 1995's "The X Factor" 1998's and "Virtual XI" — before Bruce Dickinson returned to the group. The MAIDEN albums he appeared on sold considerably less than the band's prior releases and were their lowest-charting titles in the group's home country since 1981's "Killers".

"War Within Me" came out on April 9. All songs were written and produced by Blaze and guitarist Christopher Appleton.