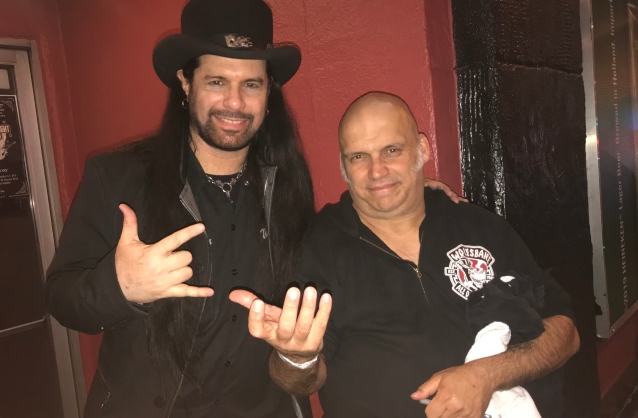 Former ANTHRAX singer Neil Turbin joined ex-IRON MAIDEN vocalist Blaze Bayley on stage last night (Thursday, May 2) at the Whisky A Go Go in West Hollywood, California to perform the MAIDEN song "Man On The Edge". Check out video footage below (courtesy of The Metal Voice).

Bayley, who fronted IRON MAIDEN from 1994 until 1999, recently announced that he will play a special MAIDEN setlist at select festivals in 2019. Choosing songs from his era with the band, these shows will celebrate 25 years since Blaze joined IRON MAIDEN. This will be the first and last opportunity to see such a setlist.

The band at these shows will be Blaze's regular touring and recording outfit taken from British band ABSOLVA, plus ICED EARTH bassist and ABSOLVA guitarist Luke Appleton.

The two MAIDEN albums Blaze appeared on, "The X Factor" and "Virtual XI", sold considerably less than the band's prior releases and were their lowest-charting titles in the group's home country since 1981's "Killers".

"Sign Of The Cross", the 11-minute opening track from "The X Factor", was performed during MAIDEN's "Legacy Of The Beast" European tour last year, the first time since 2011 that the song had been performed live. The tour also saw the band perform "The Clansman", a "Virtual XI" track inspired by Mel Gibson's 1995 film "Braveheart" that they had not played live since 2003.