BLAZE BAYLEY On Upcoming LP 'War Within Me': 'This Is An Album That I Want To Put On And Feel Very Positive About'

British heavy metal vocalist Blaze Bayley, who fronted IRON MAIDEN more than 20 years ago, will release a new studio album, "War Within Me", on April 9. All songs were written and produced by Blaze and guitarist Chris Appleton.

"War Within Me" finds Blaze moving forward from the success of his "Infinite Entanglement" trilogy released in consecutive years 2016-2018. The 10 brand new songs draw influences from Blaze's experience with IRON MAIDEN (1994-1999),plus his extensive solo career which started with his "Silicon Messiah" album in year 2000.

"War Within Me" is not a concept album but does include a positive thread throughout. In Blaze's own words: "This is an album that I want to put on and feel very positive about. Whatever song you choose, there's some good feeling about it.

"As fans of metal music, we tend to be damaged, strange and different in some way, and this album is (as I say in my live intro to the song 'Futureal') about taking your future in your own hand. It's one of the things that really connects with people at my live shows."

"War Within Me" track listing:

In November, Bayley spoke to the "Brutally Delicious" podcast about the progress of the recording sessions for his new solo LP.

"We had the plan, two years ago, we said, 'Right, this is when we're going to do the next studio album,'" he said. "And in March, I did my last show — I didn't know it was my last show — in London, a sold-out show, my 'X Factor' [25th-]anniversary concert," referring to the 1995 IRON MAIDEN LP he appeared on. "[It was] absolutely fantastic. And since then, it's, 'Oh, this festival is postponed,' 'That gig is postponed.' Well, what happened is, because we were scheduled already to do our album, it meant every time something got postponed or canceled, well, that's another three days we've got for the album, which we didn't think that we would have. Something else has happened — oh, that's another week that we've got that we didn't think we would have. And so we've had a lot more of the time, which you rarely get, and it's this cooking time, where you walk away from the songs, you leave them, you come back a couple of weeks later and go, 'Now, with a fresh perspective, how do I feel? Does it still make sense to me? Or is that riff really only there because it reminds me of something METALLICA did 30 years ago?' And that's it."

In terms of touring, like so many other artists, Blaze (normally relentless on the live circuit) has recently been restricted by the pandemic but did manage a tour of Brazil in January 2020, before a heroic sold-out performance at Burr Fest (The Dome, London) in March 2020 in honor of former IRON MAIDEN drummer the late Clive Burr. If travel restrictions permit and if safe, it is hoped to fulfil a number of festival bookings during summer 2021, followed by an extensive U.K. tour towards the end of the year, returning to Europe in 2022.

Since leaving IRON MAIDEN in 1999, Bayley has released a number of albums, including three under the moniker BLAZE and seven under his own name. He also appeared on 2012's "Wolfsbane Saves The World", the first album of new material by WOLFSBANE since the group's self-titled 1994 effort.

In April 2020, Blaze released "Live In Czech", a live album and DVD recorded in 2019 at the Melodka venue in Brno, Czech Republic. The theme of the tour followed on from Blaze's "Infinite Entanglement" trilogy of albums and the setlist particularly featured some of the more epic songs from the trilogy which hadn't previously been included in concert setlists. The set also contained a selection of songs from his albums with IRON MAIDEN during the 1990s.

Blaze recently reissued his 2002 album "Tenth Dimension" with new packaging and upgraded artwork. There was also a vinyl version for the first time. 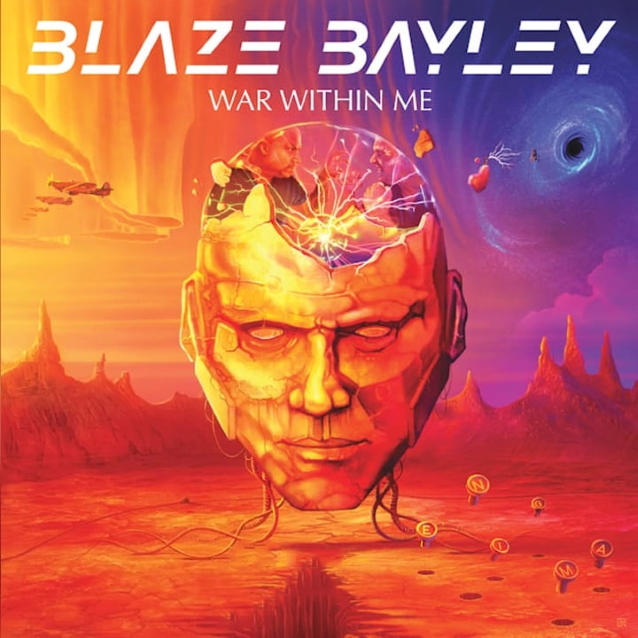