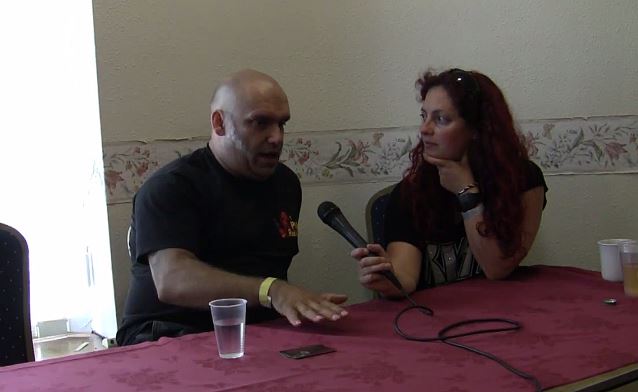 BLAZE BAYLEY: 'People View My Period With IRON MAIDEN In A Much Different Way' Than They Used To

Felicity Hall of GetYourRockOut conducted an interview with British heavy metal vocalist Blaze Bayley (IRON MAIDEN, WOLFSBANE) at the SOS Festival on July 20 in Manchester, United Kingdom. You can now watch the chat below.

On why he has been so busy on the road in recent months:

Blaze: "People seem now a lot more interested in what I do and people view my period with IRON MAIDEN in a much different way than I think at the time… It's 20 years ago that I joined IRON MAIDEN and it's 30 years since I started singing, and all of these kind of anniversary dates have come together. And I think people take a fresh look at it now, and they go, 'Well, 'The X Factor' [1995] and 'Virtual XI' [1998] albums were the start of a different era of IRON MAIDEN.' And outside of the U.K., people are a lot more fond of those albums. So it's really interesting. And people know me, I think, as much in the U.K. for WOLFSBANE."

Blaze: "I have my [upcoming concert] DVD release, so I have to finish the mixing of that, make sure the sound's really good. And then I'm preparing… I've got a big idea for my next album. And I wanna do something really fresh and new. So I'm starting to think about. As soon as the DVD is out and finished, then I'm more or less full time… all my spare time will be working on ideas and writing my new album…. I'm thinking of another concept album. I have an idea for a story. I've written a short story, and I think it's strong. I don't wanna say too much about that, but it's probably set in the future. I'm very keen on science and technology and the breakthroughs, so I always try and incorporate those things in some of my writing anyway. And I'll be working with a lot of different artists. I'll be working sometimes with Chris [Appleton] and the guys from ABSOLVA and sometimes with some guys from Norway and guys from Brazil. And the guy that I work with acoustically, Thomas Zwijsen, and the violinist, Anne Bakker. So I don't know what it's gonna sound like, but I want it to be something different. It'll be metal, because I just am metal, but it won't be trying to be metal. It'll just be an album of, hopefully, incredibly strong songs with a strong theme that goes through them."

The 51-year-old Bayley, who was born in Birmingham, was the original frontman in WOLFSBANE, but left in 1994 to replace Bruce Dickinson as the lead singer of IRON MAIDEN.