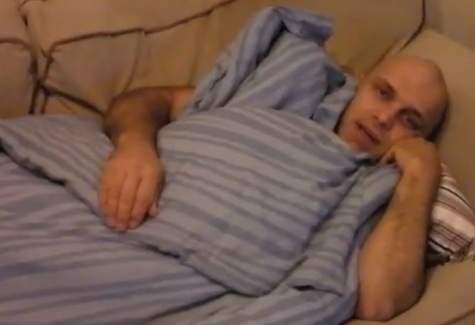 Former IRON MAIDEN and current WOLFSBANE singer Blaze Bayley has posted the latest two installments in his ongoing video diary featuring footage from the writing and recording sessions for his next studio album, "The King Of Metal". Check them out below.

Bayley has announced that he will be accompanied by Matteo "Lehmann" Grazzini, bassist of the Bologna, Italy-based thrash metal band NEURASTHENIA, on the upcoming "King Of Metal" tour. Also joining Blaze in his touring band are Claudio Tirincanti (drums) and Andrea Neri (guitar; ASTARTE SYRIACA).

"The King Of Metal" is tentatively scheduled for release this spring. A European headlining tour in support of the CD will kick off in early March in Belgium.

Commented Blaze: "Over the many years I have been a professional singer, and through my ups and downs, I have noticed how some artists and bands take their success and their fans for granted.

"I am dedicating the new album and tour to my fans and the fans of heavy metal. It is called 'The King Of Metal' because you the fans are the real kings of metal. Each one of you that buys albums and merchandise and tickets to gigs is a king of metal to me."

The 48-year-old Bayley, who was born in Birmingham, was the original frontman in WOLFSBANE, but left in 1994 to replace Bruce Dickinson as the lead singer of IRON MAIDEN.

Blaze's latest album, "Promise and Terror", was released on February 1, 2010.

The singer's double live album and live DVD, "The Night That Will Not Die" — recorded on December 13, 2008 at Z7 in Pratteln, Switzerland — were released on Blaze Bayley Recordings; the concert was filmed by director Kris McManus and all audio mixed and mastered by producer Jase Edwards.