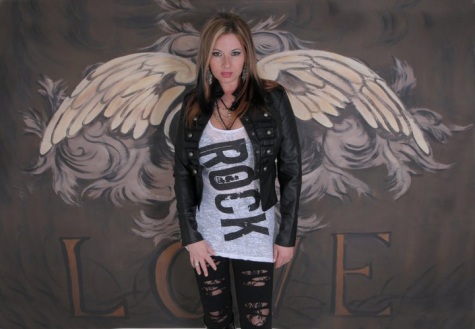 On January 14, RockEyez conducted an interview with vocalist Julie Westlake of Kentucky rockers HYDROGYN. You can now listen to the 20-minute chat in the YouTube clip below.

HYDROGYN has set "Private Sessions" as the title of its fourth album, tentatively due this spring. 13 songs were recorded for the CD at guitarist Jeff Westlake's Ridgeline Studio in Ashland, Kentucky and Patrick Liotard's Peek Studio in Boisseron, France.

After months of uncertainty surrounding the band because of Julie Westlake's health, the green light was given to Julie and the rest of the band last year to proceed ahead with the new album recordings.

Commented Julie: "This is the quickest we have ever completed a project to date.

"We decided in June that we were going to do another CD after I got clearance from my doctors to get back to work and by August we were in the studio."

For "Private Sessions", things changed up a bit as far as production. For the past two albums, Jeff Westlake handled the production, engineering, mixing, etc., to go along with the writing and song prep. Jeff said he wanted a chance to just worry about the songs on this release with limited production going on from his end. Enter the team of Anthony Dura and Patrick Liotard (who co-wrote the song "Alone" on HYDROGYN's last album, "Judgement"). Anthony and Patrick stepped in and teamed up with Julie and Jeff for this project, not only from a production standpoint but also in the creation of the project itself.

"I love these guys and what they bring to the table," said Julie. "To be able to turn to them and have a new team in the mix for the entire process with fresh ideas and a great perspective as well is just priceless. We were all introduced by our French team at Musiconlights (Mike Jublin) back in 2007 and as time has gone on, we have gotten to know each other. The working part of the relationship is just a natural progression for us all and takes some pressure off Jeff for a change."

A HYDROGYN live CD and a digital-only best-of release called "Phase 1" are also in the works.

As previously reported, former DIO guitarist Tracy "G" Grijalva has joined forces with Julie Westlake to record a collection of songs Tracy had written with Ronnie James Dio for the DIO releases "Strange Highways" and "Angry Machines" along with some of the guitarist's post-DIO material. The recordings are taking place at Tracy's G Factory studios and will include musicians that played on Grijalva's 2011 album, "Controlled Chaos" — Johnny B on drums and vocals and Eddie Frisco on bass. There is also talk of live shows taking place in the Los Angeles area this spring or summer.

"This is a a very ultra cool project that I am honored to be a part of," stated Julie.