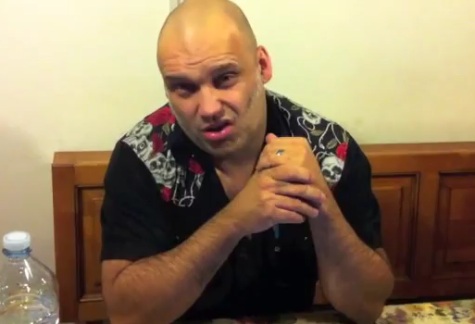 When asked about the recording process for his new album, "The King Of Metal", Blaze said, "I don't like to spend a lot of time in the studio, I don't feel it's a very creative environment. I like to spend most of my time on an album in the writing process and the composing. I feel that's the bit that really counts. I'm always thinking of the audience, the fans and how I'm going to perform the songs live."

When asked if he could offer any insight as to what the new album will sound like, Blaze said, "It'll be a bit different to what I've done before because I'm producing it. There will be a lot of heavy metal, as you would expect from a Blaze Bayley album. We decided to have no rules; if we feel something is appropriate to sing or play, we will. It's all about the vibe and passion. I'm very hopeful it will turn out to be my best work."

You can listen to the entire interview using the SoundCloud player below.

Bayley is currently at Fear Studio in Ravenna, Italy recording his new studio album, "The King Of Metal", for a spring release. A European headlining tour in support of the CD will kick off in early March in Belgium.