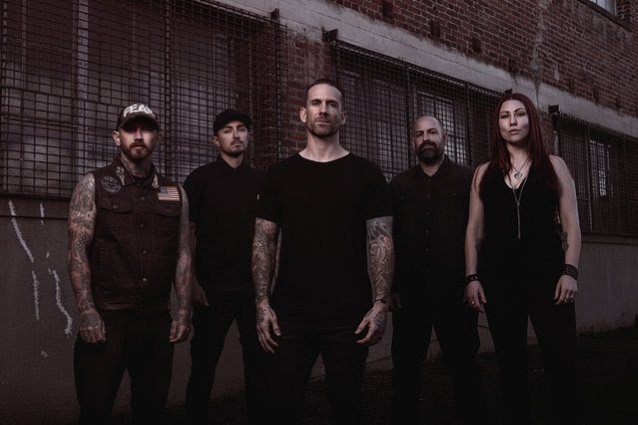 BLEEDING THROUGH Releases Video For 'No Friends'

The official video for the song "No Friends" from reunited California metallers BLEEDING THROUGH can be seen below. The clip was filmed at the band's sold-out comeback show on June 8 at The Observatory in Santa Ana, California.

"No Friends" is taken from BLEEDING THROUGH's new album, "Love Will Kill All", which was released on May 25 via SharpTone Records.

Vocalist Brandan Schieppati states: "We are super stoked to be putting out our third music video from our brand-new album 'Love Will Kill All'. 'No Friends' is perfect for the 'live set' and simply slams! This is about how through time you will absorb a collection of people who you will call friends, but in your greatest time of need, only the 'true' friends will rise to the top. This is ultimately about overall grit and perseverance, along with those incredible moments where you realize 'I'm better off without shit-head friends anyways!' This video captures a raw energy and emotion of that song played live at our hometown, sold-out album-release show, so check it out."

Asked in a recent interview with "Bods Mayhem Hour" about the circumstances that led him to reform BLEEDING THROUGH, Schieppati said: "It's a little bit of a bunch of stuff. It's not the popular answer, because bands don't want everyone to talk about finances and the business of the band, and the reason why they don't and the fact they don't talk about it more lets the music industry kind of control that dynamic when it comes to the music. I know it's like I said, it's not the popular thing to talk about it, but it needed to be talked about.

"We were a band for 15 years and once you're a band for 15 years, it really becomes your full-time job and, for a lot of us, our sole means of income," he continued. "It really was time for us; we needed to focus on other things in our lives on the personal side. We were getting to our mid-30s and it was the sort of thing where people wanted to start having kids and start families and pursue other careers they've never able to pursue before because there were always obligations to BLEEDING THROUGH. I think that, for us, it was really important to do those things.

"I find that when you look at a lot of bands, the older they get, they don't do those things. Outside of music, their life is a fucking mess. I've seen it first-hand. We saw it first-hand with hundreds of people in bands where their lives were just a fucking mess. We never really wanted to be like that. It was sort of the responsible thing, the more grown-up thing for us to do is take that time off and pursue other things.

"For me," he added, "I opened my first gym, Rise Above Fitness, in 2011 and it kind of came to a point where I realized I needed to focus on this if it's going to happen. Screaming into a microphone is not going to pay the bills forever, nor did it comfortably pay the bills ever. That's the sort of thing where people are, like, 'Fuck you, you guys do it for the money.' It's easy to say that when you're not in a band and you're in a position where we are we were literally tour and do so much that we can't do other things. It is a little about money because when that is your sole income and you're trying to support yourself and a kid and a wife, whatever, pay a mortgage, that's the long and the short of it. That's reality there.

"I think that the music industry is so fantastical all the time where they don't dwell on the reality of checks and balances, and they should. It's irresponsible for labels and management and booking agents to go out there and tell bands to do a certain thing when you know damn well it's the wrong thing on a personal level for every single person in that band. It's irresponsible. Because at the end of the day, they make the money regardless. For us, that's how we were beginning to think and feel about ourselves. We felt that to the people that were working for us label-wise, management-wise, booking agent-wise, we were a cash cow. They just kept whipping the dead horse and [told us] go out there and play and go do more and go do more and grind yourself and don't worry about your personal lives and it's all about this music and blah, blah and the whole fucking shebang rhetoric that everyone gets fed when it comes to underground music and this and that. They didn't care how we did or how we were doing because they were making their 15 to 25 percent. That's all that matters. For us, it was, like, 'Fuck these people. We need to take care of our lives because our lives were beginning to kind of be a mess and we refuse to be like that.' We also didn't want to be one of those bands who has so many daily stresses where it gets in the way of the creation of the music and the importance of the creation of the music and us being around each other and being friends and touring and playing music, because that was number one, our creation with each other is the reason why we do it.

"We just felt it was a time where we had to shut it down in order to kind of regroup [and] refocus. And then it was as easy as me being in the studio with my producer, and I was writing some stuff for some other bands, and I wrote a song that sounded like a BLEEDING THROUGH song, so I recorded it and I sent a group text to everybody in the band and said, 'Do you guys want to do this again?' And everybody said, 'Yup. Let's do it!' And I said, 'If you guys don't want to do it, if you're perfectly satisfied being away from it, then that's fine. But if you want to do it, then let's do it.' Everybody said, 'All right. It's time, let's do it.' I guess that close-to-five-year hiatus was enough to get our affairs in order on a personal level, which I think is important." 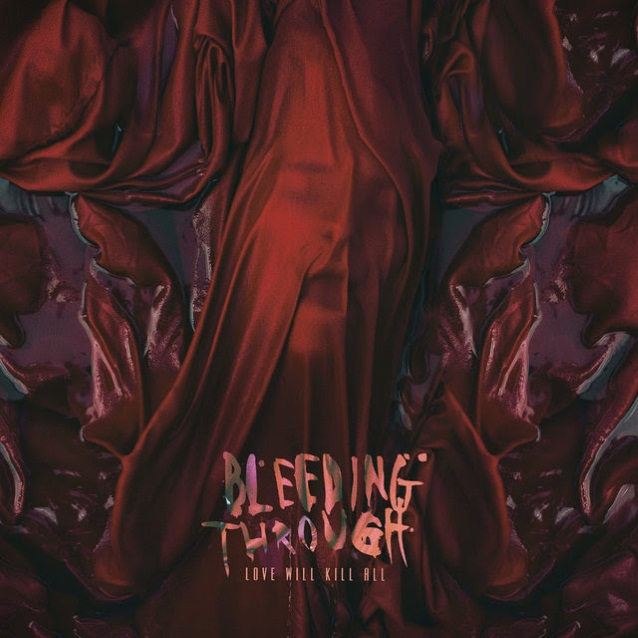