Ryfo Network reports that vocalist Tony Gambino of Canada's BLESSED BY A BROKEN HEART was admitted to the emergency room earlier this week (see photo below) with what appeared to be meningitis. "Tony and his wife are currently without health insurance," reads a post on the site. "As it turns out, Tony's meningitis-like symptoms were caused by a bad reaction to some antibiotics he was taking. . . Because of the lack of insurance, one day in the hospital has generated a hefty bill, and his visit was unavoidable. Please consider giving to Tony and his family. We have set up a PayPal to do so. If we are all able to bless them with a little, we will be able to help them cover all of their unfortunate expenses."

Read more from the Ryfo Network.

A widget for "Pedal To The Metal", the latest album from BLESSED BY A BROKEN HEART, can be found below.

Released in Europe on August 18, 2008 and North America on September 2 via Centry Media Records, "Pedal To The Metal" was recorded by GGGarth Richardson (RED HOT CHILI PEPPERS, KISS, MÖTLEY CRÜE, RISE AGAINST, ATREYU, BIFFY CLYRO, NICKELBACK, RAGE AGAINST THE MACHINE, TESTAMENT) and mixed by Mike Hatalak from IT DIES TODAY who also worked with ROSES ARE RED and DEAD HEARTS.

Photo below courtesy of Ryfo Network 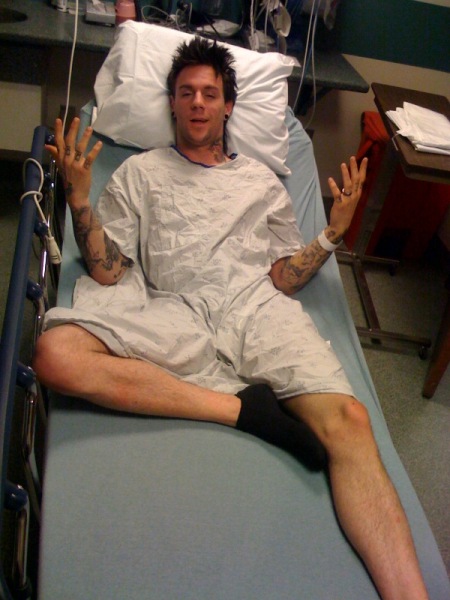