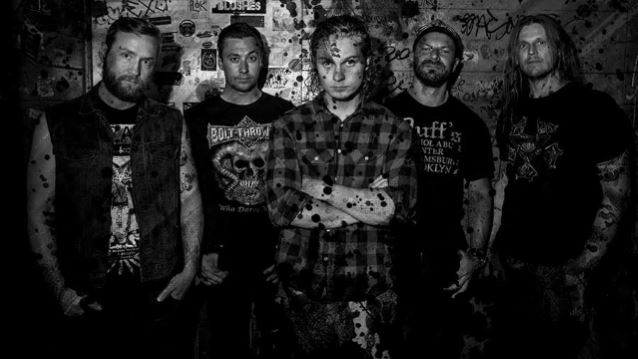 Commented BLOOD EAGLE: "Unfortunately, we have to announce that Mikeal 'Gammelfar' Ehlert will be leaving BLOOD EAGLE to focus full time on his stoner rock project IAMFIRE with Peter Dolving. There are absolutely no hard feelings at all, as we remain good friends, and wish him best of luck for the future.

"On a more postive note, we are excited to welcome Jeppe 'Panzer' Skouv taking over the subwoofer spot. We've known Panzer for many years, he is a great bass player and friend, with roots from the hardcore/metal environment, as he has been handling the bass duties in now extinct Danish hardcore act THE PSYKE PROJECT."

BLOOD EAGLE will enter Antfarm Studios in Aarhus, Denmark in September with producer Tue Madsen (BEHEMOTH, THE HAUNTED, HALFORD) to begin recording its debut album for a 2016 release.

BLOOD EAGLE's name — which represents the method of torture and execution in Nordic mythology, performed by cutting the ribs of the victim by the spine, breaking the ribs so they resembled blood-stained wings — was chosen due to the members' Scandinavian roots,.