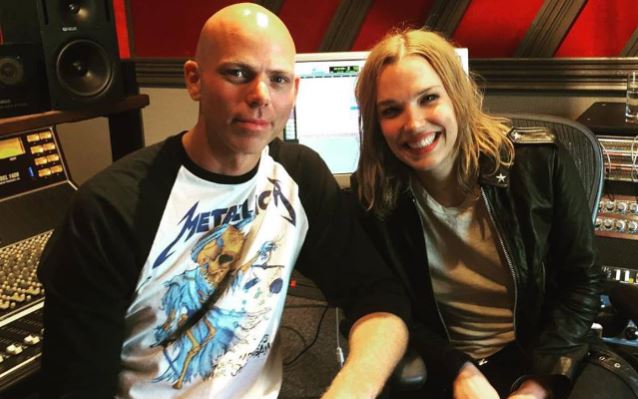 HALESTORM singer Lzzy Hale has laid down guest vocals on STONE SOUR's version of THE ROLLING STONES classic "Gimme Shelter", to be included on the Corey Taylor-fronted band's next covers EP, "Straight Outta Burbank", tentatively due before the end of the year. STONE SOUR guitarist Josh Rand wrote: "A big thank you to Lzzy Hale for killing it [on Friday, July 17] on this track. It sounds amazing!"

During an appearance on a recent installment of the "Talk Is Jericho" podcast, STONE SOUR singer Corey Taylor said that the band's next two covers EPs — titled "Straight Out Of Burbank" and "No Sleep 'Till Burbank" — will feature five songs each, and will include new versions of tracks from the following artists:

"No Sleep 'Till Burbank"

Asked why STONE SOUR decided to release three separate EPs of covers, Taylor said: "This is something we've been talking about for years. And we decided, instead of putting it all on one, and trying to make that work, we were, like, 'Let's have fun with it.' It was kind of the same spirit of why we wanted to do 'em in the first place — is 'cause we wanted to have fun, just to kind of take the edge off, take the pressure off and just go in and have fun and kind of show the world what got us into making music in the first place. So we broke it up into three. That way, we could kind of play with the artwork, make it fun for the fans, and just have a good time with it. 'Cause we're making our nut on covers. But at the same time, when you do something like that, you wanna represent to the best of your ability. And by spacing it out and letting the fans get into five at a time, nothing gets lost in the shuffle. It just felt like by doing it that way, people would have time to digest each five before the next one comes on."

In a 2014 interview with Ultimate Guitar, Taylor stated about Hale: "As modern rock as [HALESTORM] are, her voice is so gnarly and they are by far one of the best live bands I've seen. They do it for real and every note of it is for real. There's a great blend between like AC/DC and DIO with that band, and I mean that. That's just from an outside standpoint. That band is gonna change a lot of attitudes about things, and she's an incredible singer. The more she gets out there and the more she does, the more it becomes painfully obvious she's not just a woman singer. She is just a badass singer. I'd put her up against any of these chumps that are in the bigger bands, to be honest."

Hale in 2011 admitted to having a "crush" on Taylor. She told Loudwire, "I'm gonna totally ruin his hard-ass reputation right now, but, you know, there's something that I've always liked about the scary-looking guy that will, you know, in the morning call me 'darling' . . . I don't think that anyone has really ever given him the recognition for what an incredibly handsome smile he has. He never gets recognized for that."