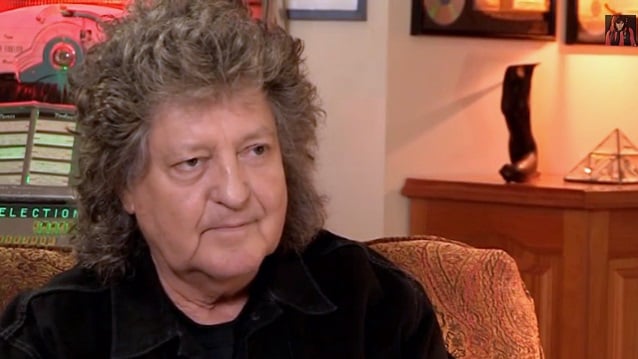 Bob Daisley (pictured),who played bass on the first two solo albums by Ozzy Osbourne, says that he was "devastated" and "flabbergasted" by the August 2002 ruling by the Los Angeles Federal Court dismissing the lawsuit over unpaid performance royalties brought by Daisley and ex-Osbourne drummer Lee Kerslake against Ozzy and the singer's wife and manager, Sharon Osbourne.

Daisley, whose "For Facts Sake" autobiography came out last year, told Australia's Guitar magazine about his legal battle with the Osbournes (see video below): "It gets pretty complicated, so you need to read the book to see all the different factes of it and levels of it, and the journey that it takes over the years.

"I started working with Ozzy in 1979, putting the band together with [guitarist] Randy [Rhoads], and then we got [drummer] Lee Kerslake. When 'Diary Of A Madman' came out, Lee and I were ousted, and 'Diary Of A Madman' came out without our credits on it, and they credited someone else that was going on the road with them. So there was a lawsuit developed out of that, which was settled in court against Don Arden, who was Sharon's father and the owner of Jet Records. But later, sort of late '90s, Lee and I found out that Sharon and Ozzy were receiving our royalties from those albums, so we sued them. And that went on for a while. And Don Arden was going to help Lee and me fighting the case for our royalties. But when Sharon found out that her father was helping us — I mean, she hadn't spoken to him for something like eighteen years or something — all of a sudden she made up with him. And he stopped helping us and went against us and that was the end of our case. But it's way more complicated than that. That's a simplified version of it."

Daisley also spoke about a video that was recently posted on YouTube of bassist Rudy Sarzo where, according to Bob, "he's playing all my lines and didn't even mention me," Daisley said. "Yeah, well… What can I say about that? [Laughs] It doesn't make me feel very good when I see that sort of stuff, because it was his name on the 'Diary Of A Madman' album instead of mine, when I'd done all the work and played on it and co-wrote the songs with Randy and Ozzy and some of them with Lee. And when that album came out, it had Tommy Aldridge as playing drums on it, which Lee Kerslake played drums, and Rudy Sarzo as playing bass on it, when I played bass. We got our songwriting credits, but not the performance credits. So, yeah, it's pretty frustrating — when you put that much work into something, and then they credit someone else. It's pretty hurtful."