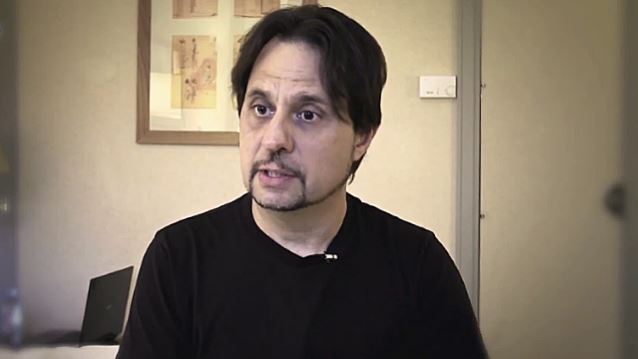 DAVE LOMBARDO Doesn't Rule Out Return To SLAYER: 'My Door Is Open'

Ex-SLAYER and current PHILM drummer Dave Lombardo doesn't rule out returning to his former band, explaining that his "door is open" to another collaboration with the legendary thrash metal act he helped launch more than three decades ago.

During an interview for VH1 Classic "That Metal Show" co-host Eddie Trunk's podcast, "Eddie Trunk Podcast", Lombardo was asked if he would ever consider playing with SLAYER again. He responded: "Would I go back? For the fans, and to retire that band correctly, I'm not gonna close any doors. Like I said before, when all this went down, my door's open, and that's basically all I have to say. So [it's] all good."

Regarding whether he has had any contact with the other members of SLAYER since the tragic passing of the band's founding guitarist Jeff Hanneman in May 2013, Lombardo said: "Yeah, that was really hard, and no, there hasn't been any communication between the guys and myself."

Lombardo was also asked if he has seen SLAYER perform with Bostaph and whether he has any interest in attending a concert by his former band with Paul behind the kit. "No," he said. "There's enough YouTube videos to see that, or to hear that. I have no interest."

During the "Eddie Trunk Podcast" interview, Lombardo offered his opinion on how illegal sharing of music has impacted the way the music industry markets and promotes its artists and commented on the way new artists have to look for outlets to create and promote their music on their own, such as selling it directly online.

"I feel positive," Lombardo said. "I'm generally a positive person. I just feel that we were… let's say the music industry, or the musicians, of course, with the big record labels and everything at that time early on, where they were giving huge advances on the record and the bands would never be able to pay those back…"

He continued: "I think we're at a time now where we just have to, kind of, recreate ourselves. We are dealing with the Internet, and we are dealing with piracy and people downloading albums for free and whatever, but you just have to recreate yourself and find new ways to get your music out. And I feel that a lot of musicians are starting to realize that unless you can deliver live… That's what's important — that you have a band that could perform live what they put down on record. Because, with all the technology these days, you can make a drummer sound like this perfect timekeeper, but then you put him out on stage with the band and the guy can't do it. He can't keep time and he can't do the rolls that he recorded. And that's all because of the technical advances and all the computers and all the software that we could use. I don't know…"

Lombardo added: "I think there's two things. One, of course, is we have to recreate ourselves and try to find different ways to market and push our music. And two, technology is great, but sometimes it can destroy you. Like technology has destroyed certain businesses, it could also destroy the musicians. 'Cause you do have to deliver live. People wanna go see a band play. They wanna see, then hear what you did on the record — and more. They expect it to be a lot more intense and a lot better.

"I feel like an album is kind of your resume to get jobs, to get work. But, like I said, you just have to go with the flow, go with the changes, recreate yourself, find other ways and other message to promote your band and get your band out there.

"It's an interesting business, and it's never been easy. So it's not a cakewalk."